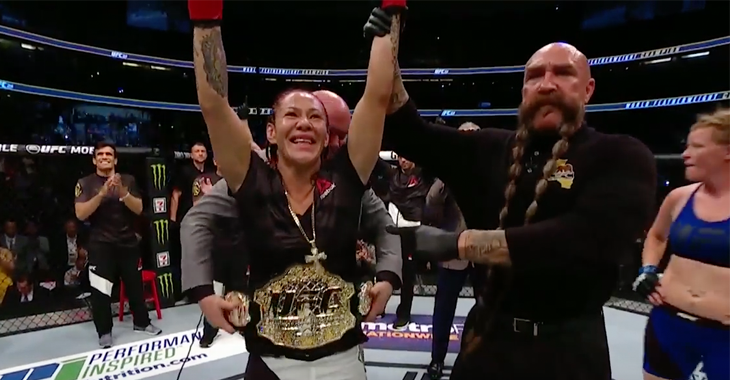 Ever since her victory over Tonya Evinger at UFC 214 to become the new UFC featherweight champion, Cris Cyborg has been on a warpath to try and defend her title against Holly Holm. There was a whole social media campaign for a fight that seemed like the only option, at least with Invicta FC featherweight champ Megan Anderson’s UFC status still up in the air. The match-up went from being a no-brainer on UFC 219 to dead in the water. Don’t lose hope yet though, Cyborg’s coach Jason Parillo recently just revealed that she will be fighting soon.

“Well, I mean I happen to be sitting here with [Cyborg] right now at lunch and her manager. Something is going to be happening. It’s not my job to open my mouth about it, but there’s definitely something exciting in the works, for sure. Cris Cyborg’s a champion. Gun to my head, we’ll see her fight very soon.” — Jason Parillo speaking to the Extra Rounds Podcast.

Today Holly’s manager said they will not fight #UFC219 https://t.co/kfFBiKYvuV

No word on if the two teams came to an agreement with each other and the UFC to finally make Cyborg and Holly Holm a reality, but it’s good to know that a fight is lined up whether it’s for UFC 219 or not. There aren’t many options other than that highly anticipated bout, but with Tyron Woodley and Nate Diaz reportedly in the works, the UFC could pull off something out of left field.

Amanda Nunes is on a six-fight win streak which includes wins over Miesha Tate, Valentina Shevchenko, and former bantamweight queen Ronda Rousey. Going up to challenge Cyborg for two titles would be a huge fight for UFC 219, but she has shot down mentions of the fight back in May. Former bantamweight title challenger Cat Zingano could also step up and challenge the champ on the year-end Vegas card. Until we get official word though, it’s all just speculation.