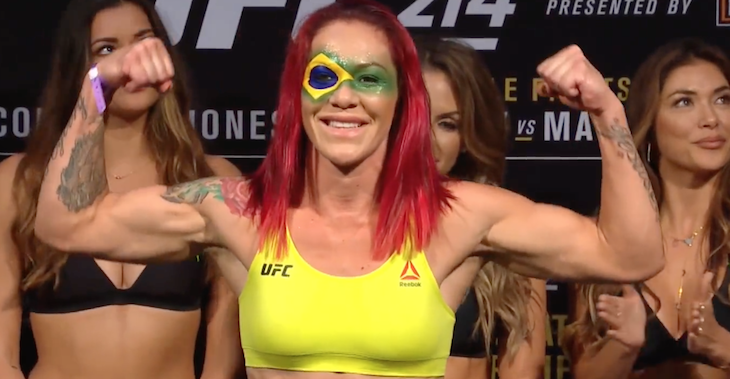 Round one begins and Cyborg presses forward and throws a left. Another left from Justino appears to rock Evinger. Cyborg rushes in with a combination. Evinger eats the blows and pulls guard. Cyborg stands up and motions Evinger to do the same. Cyborg immediately presses forward. She lands a couple of right hands and then a knee. Evinger circles out. Cyborg catches her with a hard low kick. Cristiane presses forward. Evinger ducks under a strike and shoots in for a takedown. She presses Cyborg against the fence. She scores the takedown but Cris is back up. Evinger still stays on her and scores a nice trip takedown. Cris shoots back up to her feet and lands a hard knee. Evinger circles out. She appears to accidently poke Cyborg in the eye. We break as the referee gives Cris time to recover. We restart after a long break and Cyborg quickly presses forward with an inside leg kick. Tonya fires a leg kick off of her own. They fighters clinch a Cris lands a knee. Evinger attempts to press the fight against the cage. Cris misses with a takedown. Tonya circles off the fence. Cyborg with a combination. She lands a knee and then another set of shots. Tonya circles out but eats another right hand. Cris with a follow up knee and the horn sounds to end round one.

Round three begins and Cyborg lands a jab to the body. She scores with a big right hand followed by a head kick. Another shots from Cyborg sends Tonya to the floor. Cyborg with some leg kicks and then tells Tonya to stand back up. Evinger does. Cyborg presses forward quickly. She lands a left hand and then a right jab. Cyborg continues to press forward she lands a huge knee. Cyborg drops Tonya. She rushes in with punches. This is all over!

We have a new featherweight champ in @criscyborg at #UFC214!! 🇧🇷 pic.twitter.com/ztSojkHXz5