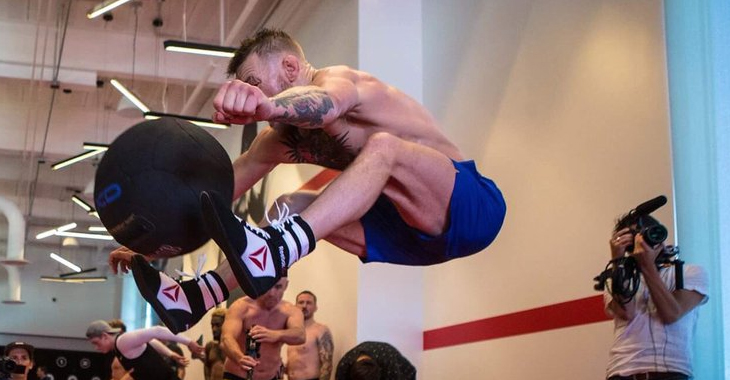 Do you remember Rocky IV? It had some legendary training sequences. Sylvester Stallone grew a beard and he depicted Rocky going back to savage basics. He ran through snow, pushed plows, jerked on ropes, he had to get primal to fight his opponent. All this was set up to juxtapose Ivan Drago in a state-of-the-art facility, with cords hooked up to him while he was attached to lifting machines. Doctors were even there recording every result and change in his body. That’s kind of what Conor McGregor was doing down at the UFC Performance Institute to push himself to the next level in preparation for Floyd Mayweather.

“It’s kind of common knowledge through social media and things like that, Conor has used our altitude chamber extensively. Ultimately what he’s trying to do is change his physiology somewhat. If you look at the work-rest ratio of boxing, it’s about 3-to-1. If you look at the work-rest ratio of a UFC fight, it’s about 1-to-4. It completely flips the physiology on its head, right? Which means Conor has kind of adapted his physiology to 12, three-minute rounds rather than five, five-minute rounds.” —  UFC Performance Institute vice president of performance Duncan French speaking to MMA Fighting.

“Things like just doing the interval work that he’s been doing in the hypoxic [altitude] chamber is going to try and help his physiology to support that. He’s used the altitude chamber extensively. A lot of his workouts are based on heart-rate assessment and looking at high-level threshold training.”

Running underwater, training in hypoxic chambers, bigger, stronger, faster. This is what Conor McGregor was aiming for. He combined this new training with the F.A.S.T. (Fighter Anaerobic/Aerobic System of Training) program his team developed with an Irish cyclist and a physiologist to get ready for Nate Diaz. His last fight with Diaz proved way different than the first, McGregor attributed that to his new program. Duncan French, the VP of UFC’s Performance Institute, believes his time there will also result in visible pay-offs in the fight with Mayweather. We’ll find out if it did in just a few, short hours.

“We hope it does and we surely believe it will, and I think that comes back to capabilities. The UFC Performance Institute offers Conor capabilities that he wouldn’t have otherwise have in his regular training facility. He’s embraced those. He’s an athlete that’s very in tune with his body. He’s in great shape, he’s ready for the fight of his life. And he’s prepared effectively and used every piece of our capability that he wanted to to help him in this process.”