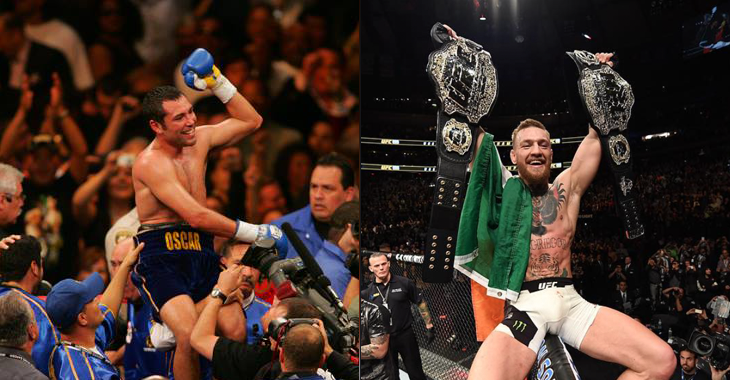 We once heard that a boxing match between Floyd Mayweather and Conor McGregor would never happen. It came straight from Dana White’s mouth.

Former boxing world champion and Olympic gold medalist Oscar De La Hoya made it very clear of his disdain for the Mayweather and McGregor boxing match. De La Hoya penned a lengthy letter encouraging boxing fans to stay far away from paying “to see a joke of a fight and telling our casual-fan friends that they shouldn’t either.” The 44-year-old boxing legend said his goal was to “protect the sport of boxing.” Come just six months later, De La Hoya’s tune has changed quite dramatically. The Golden Boy Promotions founder has called out McGregor to a boxing match and says he has been “secretly training” and would only need two rounds against the current UFC lightweight champion.

Bovada (via MMA Junkie) released the following odds for bets that surround the McGregor vs. De La Hoya talk:

What are your thoughts on a potential boxing match between Conor McGregor and Oscar De La Hoya? What do you make of De La Hoya trashing the Mayweather and McGregor bout and now trying to campaign for his own boxing match with McGregor? Let’s discuss this in the comment section.