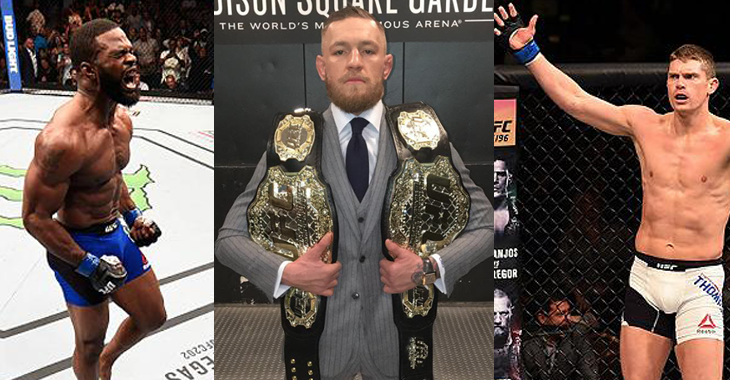 There is much speculation as to what will come next for UFC superstar Conor McGregor.

With his last title fight against Eddie Alvarez at UFC 205, “The Notorious” became the first fighter to be a concurrent two-division UFC champion, holding both the featherweight and lightweight titles.

Following the historic fight, McGregor told the media that he will be having a baby in May and wants some shares in the UFC company if they want to see him step in and compete in the Octagon again.

UFC President Dana White has even stated that “The Notorious” will not be fighting before the birth of his child, which is due in the summer of 2017.

A few potential matches are looming as current UFC interim featherweight champion Jose Aldo looks to get his rematch against McGregor. Also, with McGregor winning the UFC lightweight title, Khabib Nurmagomedov is another potential opponent for McGregor at 155.

Nurmagomedov’s AKA teammate Luke Rockhold gave his breakdown to Submission Radio of the stylistic matchup between the two lightweights.

“McGregor’s dangerous,” Rockhold stated. “Khabib can’t stay on the feet like he did with [Michael] Johnson, you know. I have never seen a left hand like that [of McGregor’s], that he just touches guys and they wobble.”

The former UFC middleweight champion went on to talk about Nurmagomedov’s strengths.

“Khabib is unlike anybody else that I have ever grappled with. A 155-pound man who can grapple with me and give me competition. I haven’t seen that anywhere. And I know what it’s going to be like. If Khabib gets a hold anybody, it’s over. And, it’s that one shot, it’s that striker vs grappler game. If Khabib gets a hold of McGregor, I don’t think he is going to last at all, but it’s the same thing with McGregor, you can’t give him the opportunity on the feet. So, we’ll see.”

There has also been the talk of “The Notorious” going up to 170 to challenge Tyron Woodley for the welterweight title as well and Rockhold definitely isn’t counting the Irishman out in the higher weight class.

“It’s an intriguing match-up, no doubt,” said Rockhold. “We’ll see what comes, how they make that. I think he is still dangerous, dangerous to that division too. Anybody that can strike that well and it seems like his power can translate over divisions pretty well.”

“So, I think, Tyron is not the biggest guy at 170,” said Rockhold of the current welterweight champion. “Obviously he has proven to have some trouble in the striking realm with a guy like ‘Wonderboy’, so McGregor is going to be in that same realm.”

Who do you think Conor McGregor will take on next in the Octagon? Sound off in the comments!