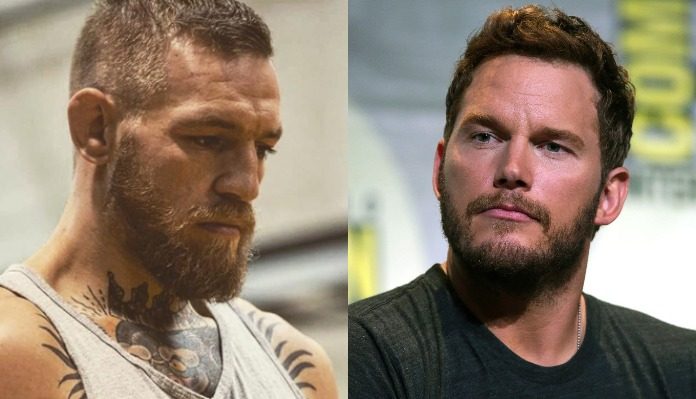 Hollywood superstar Chris Pratt, who has recently starred in blockbusters like Guardians of the Galaxy, Jurassic World, and Avengers: Infinity War, is big on MMA. He even attended Bellator 200 in London last Friday.

During his visit to the UK, Pratt spoke with entertainment.ie. In this interview, the Hollywood star discussed his love for MMA and Conor McGregor, and said that he’d love to do some training at SBG Ireland, McGregor’s home base.

“Are you out of your mind? I would love to!” Pratt said when asked if he’d like to train at SBG (transcribed by John Balfe for The Mac Life. “I’m slightly tied up with a press tour at the moment but I’m telling you, I would love to. I’m a huge fan of MMA obviously.”

“Conor’s camp, they’re terrific. Like you said, they’re one of the best in the world. I have a lot of friends in other gyms. Look, no question [SBG Ireland] is world class and they created maybe the best pound for pound fighter in the world out there and there’s some great fighters coming up out of there and I’d love to go.

“I’m under no illusions that I would ever be able to do anything but just be a punching bag, but I’d be happy to do it.”

Interestingly, Chris Pratt also had some high praise for British MMA star Michael “Venom” Page, referring to him as “the future.”

“Thanks [Bellator] for an amazing night,” Pratt said in an Instagram post shortly after Bellator 200. “I was honored to meet [Michael Page]. Peep the infinity gauntlet! Straight up? This dude is the future. Never seen anything like him before. He moves like Anderson Silva or Jon Jones, has more swag than Connor McGregor. I’ve never seen a more mean, dynamic, explosive showman in the ring. He viciously and systematically broke his opponent, a very worthy man by the way. Can not wait to watch him fight again.”