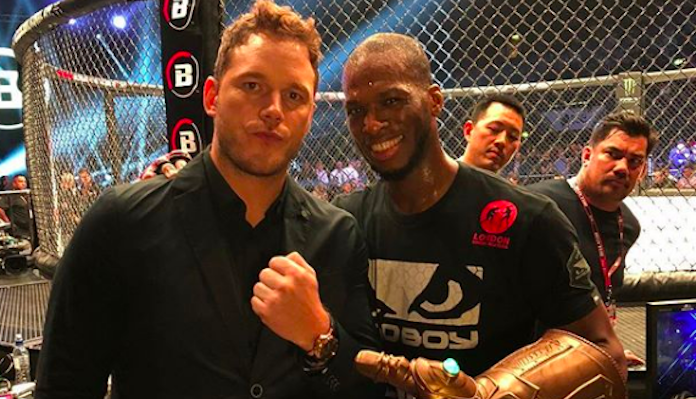 There was a bevy of mainstream stars in the crowd for Friday night’s Bellator 200 card, including 50 Cent, Conor McGregor, and Hollywood superstar Chris Pratt.

Shortly after the event, Pratt, who has recently starred in films like Avengers: Infinity War, Guardians of the Galaxy, and Jurassic World, took to Instagram with a post that praised Bellator 200 main card fighter Michael Page.

“Thanks [Bellator] for an amazing night,” Pratt said in his post. “I was honored to meet [Michael Page]. Peep the infinity gauntlet! Straight up? This dude is the future. Never seen anything like him before. He moves like Anderson Silva or Jon Jones, has more swag than Connor McGregor. I’ve never seen a more mean, dynamic, explosive showman in the ring. He viciously and systematically broke his opponent, a very worthy man by the way. Can not wait to watch him fight again.”

Unsurprisingly, Page quickly responded to this praise from the Hollywood actor.

“Much respect to [Chris Pratt] for his kind words on his post,” Page said in his response. “I was shocked to even see him in the crowd, let alone spend time with him after the show. Such a genuine guy with some amazing stories! Much respect to my infinity gauntlet brother. [Bellator 200] was unreal and will be a show that I’ll never forget. ”

In the Bellator 200 main event, Michael Page authored a decisive beatdown of the game David Rickels. In the second round, Page opened a nasty gash over his foe’s eye, which served as the catalyst for the bout’s end. While nothing is certain just yet, the consensus seems to be that Page is ready for a big step up in competition — perhaps even a title shot.

What do you think of Chris Pratt’s praise of Michael Page?