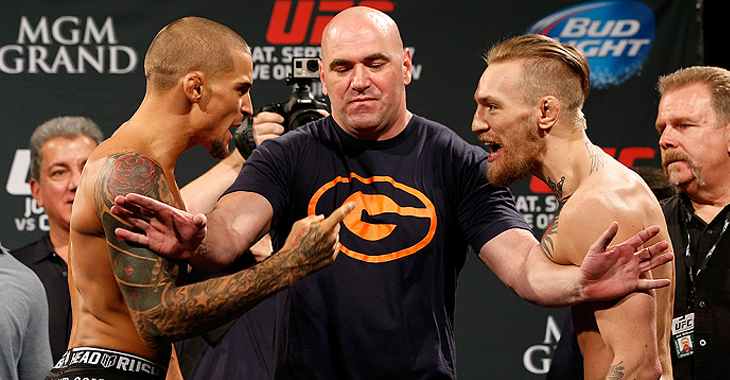 Things at lightweight are as convoluted as a Christopher Nolan movie plot. Tony Ferguson is the interim champion, who is waiting for Conor McGregor while he’s off surveying all of his nearly infinite options. Meanwhile, Eddie Alvarez just finished Justin Gaethje and Khabib Nurmagomedov is just a couple of weeks away from fighting Edson Barboza to potentially determine the #1 contender. That leaves Dustin Poirier just below this logjam, potentially a single win away himself of being in title contention. Which is why he’s pushing the UFC to strip McGregor to release the floodgates as much as he wants to fight Alvarez again.

“The thing is, the UFC’s pretending with Conor [McGregor], but you have a list of top 10 fighters who aren’t pretending or messing around. This is their lives and their goals and their family’s future, a lot of stuff on the line here. So no pretending — let’s strip the belt from the guy or make him fight. We have to [strip him] and then other fights make sense. Tony [Ferguson] gets the belt, his belt becomes the real belt and then he fights the winner out of these next few fights we have coming at the beginning of the year. We’ve got to clear it up. I’m going to be the world champion next year.” — Dustin Poirier speaking to MMAWeekly.

My efforts are being supported by the universe; my dreams manifest into reality before my eyes.

It looks like Dustin Poirier is trying to trigger Conor McGregor to pull a Georges St-Pierre. The now former UFC middleweight champion vacated the belt nearly as soon as he earned it due to health concerns. Suddenly, a new title fight was made, everyone in the rankings move up, and new contenders were created. It created a massive movement, a movement that Poirier wants to be apart of. With Eddie Alvarez saying a rematch with Poirier is in his rear-view now, McGregor vacating the title would put Diamond that much closer to a belt.