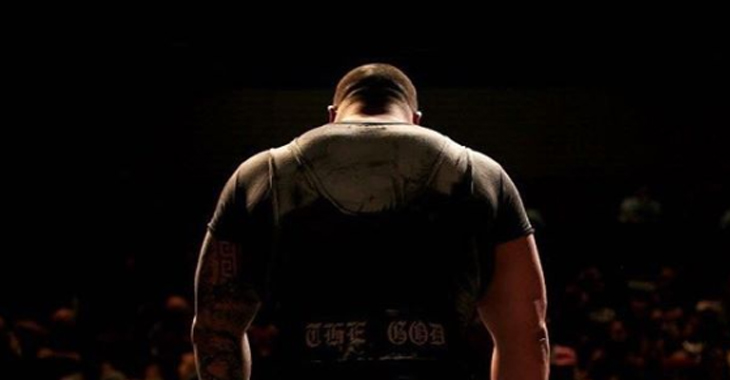 Fight fans are always drawn to scary heavyweight fighters. Brock Lesnar broke out of the pro wrestling ring and tore through the UFC as we all tuned in and screamed while he dominated. We marveled at the boxing of Junior dos Santos and the ferocity of Cain Velasquez, both very quick for men their size. The latest hyped heavyweight isn’t Stipe Miocic, but 6’4″ Francis Ngannou walking around well over the 265-pound limit. Which is why when powerlifter Alex Simon declares he wants to be heavyweight champion some day, it’s not that hard to fathom.

“[Signing on with Team Bodyfit at Miranda] has given me a opportunity to pursue my dream since I was a young kid and that is what I will be doing now out of this amazing facility and that dream is to become UFC world heavyweight champion. I will now be putting all of my time and focus into becoming the best MMA fighter I can be and couldn’t ask for a better place for that to happen. Today is my 25th birthday and I have a goal which I will be working towards every single day of becoming heavyweight champion of the world before my 30th b-day in 5 years time. I have the perfect team behind me now to get me to the top of the fight game and I am extremely motivated to be champion, massive thanks to my team who believe in me and my goal. Let’s do this.” — Alex Simon from his official Instagram account.

Alex Simon boasts a 960-pound squat, 574-pound bench, 882-pound deadlift at 6’3″ and 330lbs. If that’s not enough man for you, he’s currently undefeated and his four fights have all been finished in under 30 seconds. Of course, if he wants to be competitive in the UFC, it’s going to take a lot more than freakish power. However, those hands of stone can go further at heavyweight than any other division. If the UFC are looking to add another monster on the roster in the future, this one is at least worth keeping a close eye on to see if he keeps the streak up.