It sounds like Conor McGregor’s Bellator incident will be costing the UFC, Tony Ferguson, and himself a lucrative Christmas.

On Friday, the UFC lightweight champion brought a lot of eyes on the Bellator 187 event that took place in Dublin, Ireland. Following McGregor’s teammate, Charlie Ward knocking out opponent John Redmond, McGregor scaled the Bellator cage and jumped in to celebrate Ward’s win.

Marc Goddard, who was the referee for the Ward vs Redmond bout had a word with Conor and apparently told him that the fight was not over yet. This is when McGregor “lost it” and pushed Goddard and shouted at him in the cage and even slapped a Bellator staff member.

With McGregor not being a licensed cornerman or fighter in the event, sanctions for his actions lie in the grey area. However, Mike Mazzulli, who is the president of the Association of Boxing Commissions and Combative Sports (ABC) and is also the director of the Mohegan Tribe Department of Athletic Regulation (MTDAR), which was the lead regulator of the Bellator 187 spoke on The MMA Hour on Monday and revealed some news he got from UFC executives. 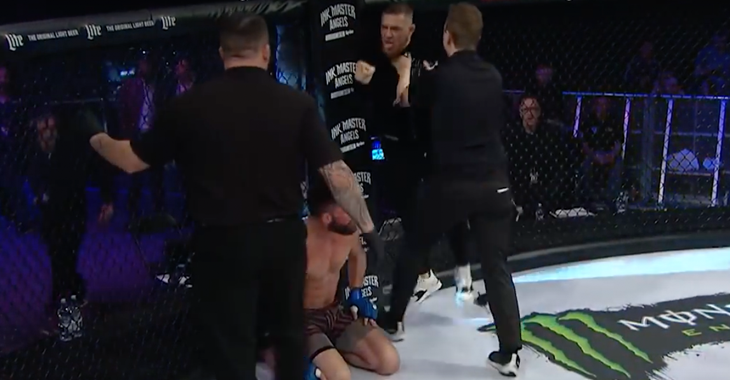 “I had some executives from UFC contact me within two hours after what occurred and they basically said to me that it’s completely unacceptable in their eyes and that they will be doing something,” Mazzulli said (transcribed by Jesse Holland for MMA Mania).

“They did inform me that he was set to be on the December 30th card and he will not be on it,” Mazzulli added. “So I do commend UFC to some extent for doing that.”

With McGregor not fighting in December, it might be more of a sting for Dana White rather than “The Notorious” one as the UFC President has expressed his ideal timeframe for the Irish superstar to return to the Octagon. Nonetheless, Mazzulli made it clear in emphasizing that Conor McGregor is not bigger than the sport of MMA and that MMA will continue with or without the Irish superstar.