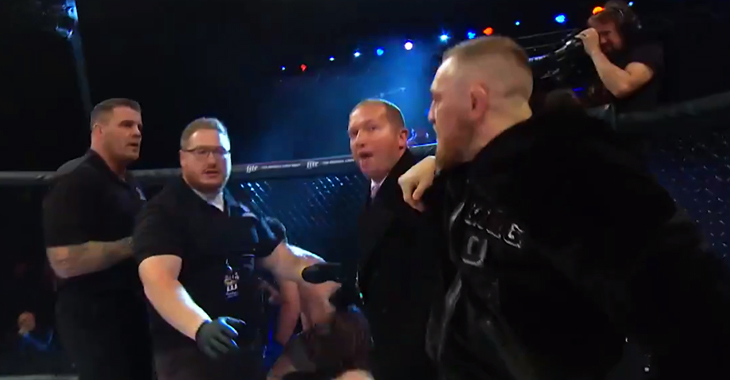 “The Notorious” made a big scene in the Bellator cage after his teammate Charlie Ward knocked out opponent John Redmond at the end of the first round. McGregor, who was sitting cageside as a spectator scaled the cage and jumped in following Ward’s finish. Immediately following McGregor hugging and celebrating with Ward, referee Marc Goddard, who recently had to scold McGregor at UFC Fight Night 118 had a few words with “The Notorious.” This is when McGregor “lost it” and went off on Goddard, shouting at him and pushing him in the Bellator cage.

McGregor tweeted and quickly deleted an explanation on Monday. However, when you post something on the Internet and you have millions of followers, someone is bound to capture it.

McGregor apparently tweeted, “Bloke KO’d on floor bout a minute straight and ref trying to say fights not over Conor. That’s when I lost it. F**k yous all.”

McGregor tweeted this earlier regarding the weekend's incident and then deleted it pretty much straight away…#McGregor&Goddard#Bellator187 🇮🇪 pic.twitter.com/JEVan3yroN

McGregor was also seen slapping a Bellator staff member while sitting on the cage after the staff member tried to push Conor back down off the cage.

Mike Mazzulli, who is the president of the Association of Boxing Commissions and Combative Sports (ABC) is also the director of the Mohegan Tribe Department of Athletic Regulation (MTDAR), which was the lead regulator of the Bellator 187 event released a statement on McGregor’s incident. Mazzulli stated McGregor “assaulted” Goddard and the Bellator staff member. Mazzulli’s statement also mentioned that the MTDAR has been in consultation with the upper management of the UFC and let the ABC know of McGregor’s incident and behavior.