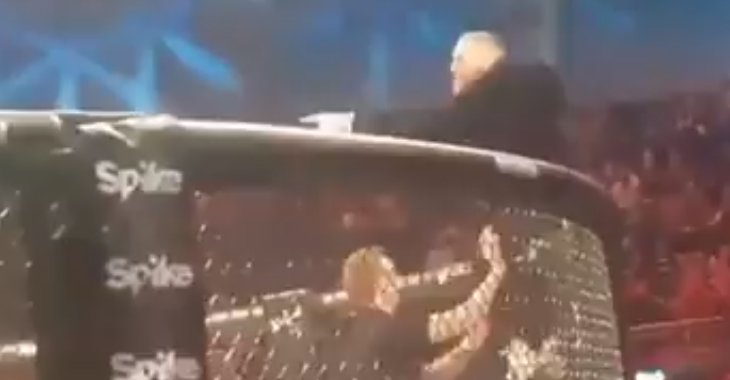 Conor McGregor also slapped a commissioner tonight as he was told to get down from the cage. Not good.

By now, you’ve all heard or seen the chaos that unfolded at Bellator 187. Conor McGregor stormed the cage not once, but twice, after his teammate Charlie Ward finished John Redmond. He rushed referee Marc Goddard, getting his hands on him twice and even pushing him. At some during the pandemonium, Conor McGregor can be seen in the video above straight Stockton slapping a Bellator official in the face for trying to prevent one of his attempts to enter the cage.

To put Conor McGregor’s actions into perspective, Roy Nelson pushed referee Big John McCarthy with his foot after he thought he let his fight with Bigfoot Silva go on too long at UFC Fight Night 95. He was initially hit with a nine-month long suspension and a fine of $24K, but a Brazilian sports court reduced Roy Nelson’s suspension from to six-months and a fine of $13.7K after issuing a formal apology.

It’s unclear what sort of possible punishment that Conor McGregor may have to endure after his actions today at Bellator 187. He’s already been in trouble with the commission from the bottle throwing incident at UFC 202 and has faced harsh criticism for some questionable words at UFC Gdansk where his first back-and-forth with Goddard took place. Former UFC fighter Jason High put his hands on a referee back at UFC Fight Night 42, here’s what Dana White had to say about him after he was cut.

Conor McGregor put his hands on the ref at today’s Bellator. Will anything happen?

Here’s what Dana White thinks of situations like this: pic.twitter.com/RjydQ2zIil