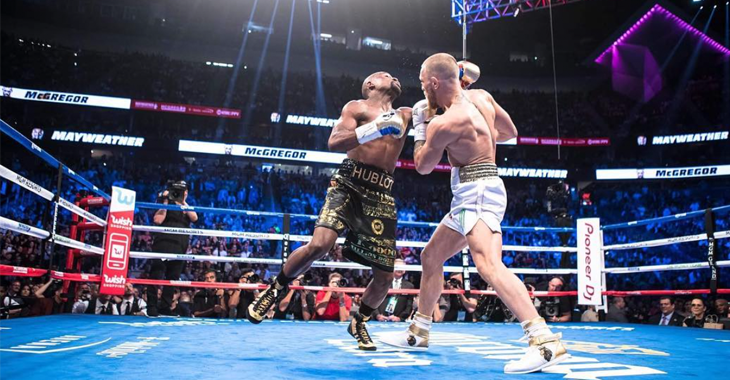 “Mystic Mac” was stopped by the undefeated boxing legend via tenth-round TKO this past August in Sin City.

The brash Irish superstar claims that he learned a lot in his first encounter with “Money” and could use that knowledge to hand Mayweather his first career defeat in a rematch. “What’s sickening me is that the little motherf**ker is retired now,” McGregor told Caroline Pearce at An Evening with Conor McGregor at Glasgow’s SEC Armadillo venue (as transcribed by MMAFighting).

“I know if I went another go with him, under boxing rules, I’d get that win. I know that. I know by the feeling of him in the first fight. He had to change his whole approach. He fought completely different than he ever fought. He couldn’t figure out what I was doing early on.”

“With the lessons I learned from that first fight, if I had another go now, I’d get him. At the same time, he’s 50-0 and he’s getting on, I’m not gonna start calling him out. I’m happy to see a fighter do well.”

McGregor does not feel inclined to callout Mayweather for a rematch, but he does believe that Mayweather’s ridiculous spending habits could result in a second scrap.

“It’s a dangerous game we’re in. I’m not gonna start calling him out. I’ll sit back and wait and I’ll fight. Let’s see how (Floyd) handles this round of money. I might get the phone call again and we may do it again. Originally, he said an MMA fight next. He was talking about an MMA fight next. That’s what he said before the fight. So, what’s he going to do? Does he want another fight? In my head I’m thinking, get one of these boxing guys to come over into my world now.”

Do you think we will ever see a rematch between Floyd Mayweather and Conor McGregor in boxing or MMA? Sound off PENN Nation!