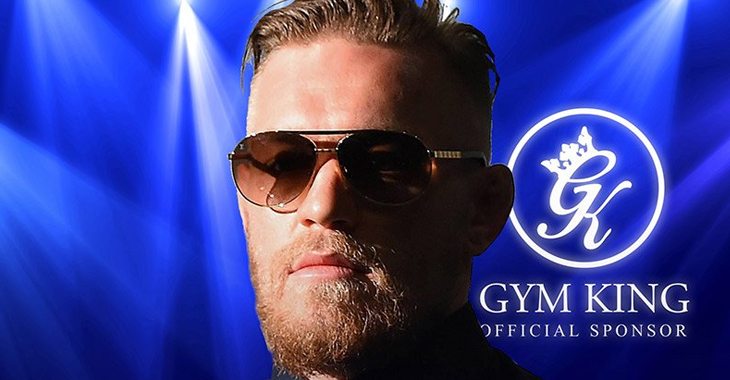 In Conor McGregor’s first major public appearance since his gigantic money fight with Floyd Mayweather, he was set to have an hour Q&A session on pay-per-view with Dan Hardy. That event was canceled for still unreported reasons, but his event tonight in Glasgow went off without a hitch. Will he compete in another boxing match? Is he really coming back to the UFC to fight Nate Diaz on St. Patrick’s Day 2018? What about Kevin Lee and Tony Ferguson’s interim UFC lightweight title fight? The UFC ‘champ champ’ sure had a lot of subjects to discuss, but maybe too much to think about.

McGregor says Malignaggi is a rat.

“Paul Malignaggi should] bring his balls and come to MMA.” – Conor McGregor talking to the Glasgow crowd.

The loss to Floyd Mayweather is still fresh in his mind. Despite having time away gallivanting in Ibiza staring at yachts and for sure counting his well-earned money, Conor McGregor still doesn’t agree with the decision to stop the fight. Much like his first loss to Nate Diaz, McGregor feels he would be better prepared if Mayweather gave him a rematch. Something that McGregor doesn’t think is that unlikely.

McGregor thinks he would beat Mayweather if they fought again.

McGregor says he feels like almost sold himself out fighting Mayweather

McGregor says he could get a phone call to fight Mayweather again. Cites May's tax issues.

“If I changed my preparation [for Floyd Mayweather], it would’ve been the easiest fight of my career.”

As for MMA, it seems like Conor McGregor hasn’t made a decision on who he will fight next, despite a big fight with Nate Diaz being heavily passed around. It makes sense considering Tony Ferguson or Kevin Lee could put on an incredible performance at next weekend’s UFC 216. With fans constantly criticizing McGregor on his opponent choice and defending belts, him strutting back into the UFC and unifying the UFC lightweight titles would silence a lot of critics. Not to mention, there’s always Khabib Nurmagomedov lurking around and the winner of Justin Gaethje/Eddie Alvarez at UFC 218.

McGregor says he's waiting to see what happens with Lee and Ferguson, wants to look at the whole picture before he makes a decision

McGregor says fighting Khabib in Russia is an option.

“Let me see what those two fools [Tony Ferguson and Kevin Lee] do this weekend.”

As we all know too well, lightweight wasn’t the only division Conor McGregor stepped away from to pursue bigger fights. In his absence, Max Holloway climbed up the rankings like a mad man and became the only guy other than McGregor to defeat Jose Aldo in the UFC. While it doesn’t look likely that McGregor could make that drastic cut all the way back down to featherweight, he did praise Holloway and doesn’t rule out fighting him either.

McGregor hails Max Holloway. Praises him for his win streak after losing to him in Boston.

“I want to be remembered as a motherf-cker that shows up.”

If it’s options Conor McGregor wants, it’s options he’s got. Through the course of the event, McGregor named Nate Diaz, the entire top-five at lightweight, Max Holloway, Paul Malignaggi, and even Georges St-Pierre. All of which he could have as fights if he just chooses a name. McGregor noted he’d be watching UFC 216’s interim lightweight title fight, Gaethje’s contender fight with former opponent Alvarez , and UFC 217’s middleweight championship between Michael Bisping and GSP. Of course, McGregor isn’t interested if St-Pierre loses.

McGregor is entertaining a fight w. GSP, but doesn't think he'll get past Bisping. "Bisping is going to beat Georges St-Pierre's ass."