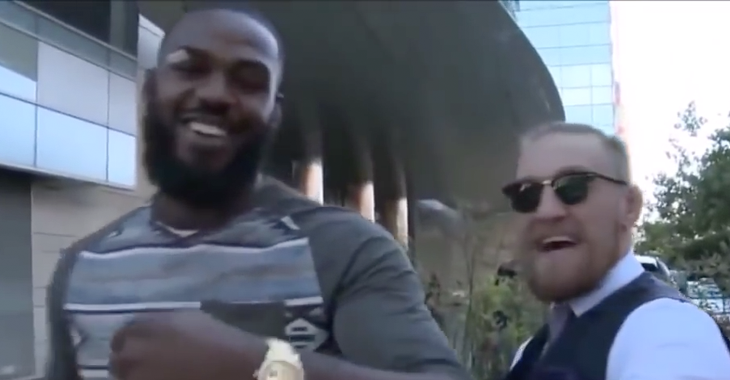 According to Dana White, there were plans for Conor McGregor to fight on the last pay-per-view card of the year at UFC 219. However, McGregor’s incident in the Bellator cage that brought a lot of attention to the UFC’s main competitor had him nixed from the event for shoving the referee and slapping a Bellator staff member.

Now, rumors are swirling around that “The Notorious” punched a man in a bar in Crumlin, Ireland. Reports have been circulating in Irish media that the man McGregor hit has ties to the mob in Ireland.

Speaking with the media today in Las Vegas, Dana White stated that he is not even sure if McGregor will ever fight again. Given the money that he has already made, White put it rather simply with the motivation needed for getting punched in the face every day when you have $100 million in the bank.

“And the other thing with the Bellator thing – he’s a young, rich kid who is a God in Ireland,” said White (transcribed by Tim Burke for Bloody Elbow). “That’s not the healthiest environment either. I don’t know if you guys remember in the very beginning with Jon Jones, there’s no doubt the talent was there. I used to go ‘The guy’s talented. But he’s young and he’s rich and he’s the king of the world right now. Hopefully he can keep it together.’ And that’s way before any of the crazy sh-t started.” White stated that they are working on a new deal with the Irish superstar. McGregor has made it clear that he wants some ownership of the UFC company to continue fighting. When White was questioned if that will happen, the UFC President replied, “Did (Michael) Jordan get points?”

White added that when it comes to working with McGregor, there was only one issue he could really harp on the brash superstar. “He’s actually not that hard to deal with. If he could show up on f–king time, it’d be perfect. He’s cocky, he deserves to be cocky, the kid is incredible. Being cocky is part of this business. If you’re not cocky, you’re probably in the wrong business. You have to believe in yourself the way that this guy believes in himself.”