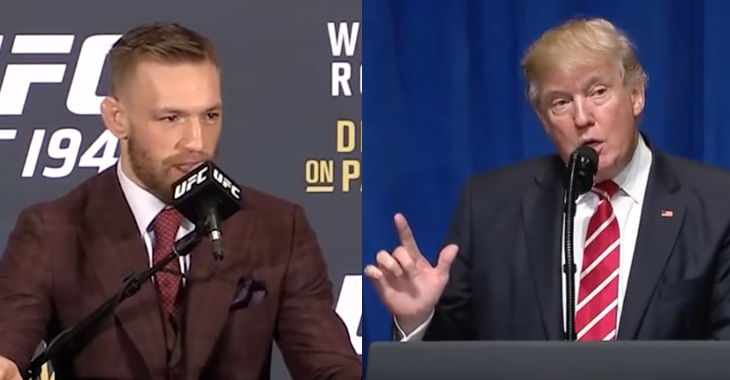 We have seen a couple fighters from the MMA community invovled in some heated situations at political rallies recently. Jake Shields had to help a man from “being jumped by thugs” at the recent UC Berkeley protest and Jeff Monson got clipped a few times at a Trump protest in Florida.

UFC lightweight champion Conor McGregor recently spoke with GQ on people’s polar views on politics and the new President of the United States.

“I feel you’re in charge of your own situation. When you start blaming others for your situation, like I see all these people screaming at these politicians,” McGregor recalled as he was in New York for UFC 205 where anti-Trump protesters were gathering in the streets. “And I was like, ‘It’s the wrong mind-set!’”

McGregor said he feels the same way about the MMA unions and Associations that have popped up recently as well.

“I saw this union thing they tried to do—they reminded me of the people that march about the politicians. It’s you gotta do it. You’re in control of yourself.”

GQ’s Zach Baron then asked Conor McGregor if he feels that it simply doesn’t matter whether it is Trump or another person who was elected as President.

“No! It doesn’t. People like to blame others. I think a person should just look at their own situation, look around them, find out what they wish to do, and seek and go and do that. And that’s it. I was in New York when all of that was going down, the protests in New York with the Trump thing. It’s like, ‘Trump, out!’

“When Obama came in, what happened to you? Like, all these fighters: ‘This union is gonna save us!’ What do you mean, it’s gonna save you, exactly? You think just because we get a union set up, you’re gonna become a multi-hundred-millionaire? That’s not the case. You might get a hospital bill paid. I just think it’s a crazy thing to spend energy on. Now, maybe there’s people that get kicked out of their home, you know, things like that and all.”

Baron went on to suggest to “The Notorious” that Trump may not necessarily affect his or McGregor’s life much directly, but possibly could have a big impact on others’ lifes.

“Yeah, but you think it’s actually him that’s gonna…? Everybody’s just pointing at him, and I don’t know. Rather than putting your energy into pointing the finger at somebody else, figure out what it is you need to do and do it, and do it right, and get it done, and get your situation right. And if a person does that, then their life will get better. Standing on a fucking picket…I don’t know.”

What are your thoughts on Conor McGregor’s views on politics? Let’s take this one to the comment section.