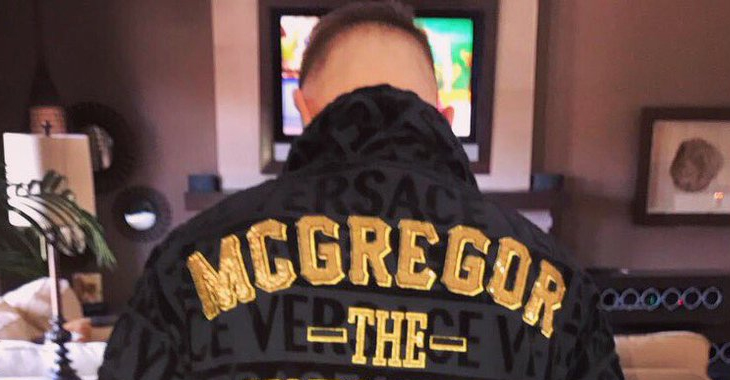 The old saying goes that imitation is the sincerest form of flattery, if that’s the case then Conor McGregor has flattered a lot of people. Floyd Mayweather has already tried to call McGregor out for supposedly stealing his entire blueprint. That may not be totally accurate, brash and extremely successful athletes mostly take the same path. If you want to talk about rags to riches and going from fighting on undercards to promoting events, then Mayweather has something. But there’s another side to McGregor which hearkens back to someone else: the alligator shoes, the classic timepieces, but most importantly those fancy robes.

Thank you @donatella_versace for this amazing gift this morning 🙏 pic.twitter.com/SEoH3QlpPB

You know you’ve made it when you wake up to a present from Donatella Versace. Who does the stylin’, profilin’, limousine ridin’, jet flyin’ Conor McGregor remind you of in his brand new silky black robe? Why, none other than the “Nature Boy” Ric Flair. Woo! To be the man you have beat the man, or at least dress like him. It wouldn’t surprise anyone if McGregor sported a feather boa, matter of fact, it’s more surprising he hasn’t. Ric Flair isn’t the only guy that McGregor’s robes have drawn comparisons to, actually he and Mayweather have the same damn robe. Oh yeah, that’s also another Versace robe as well. The new shiny black one is probably another old thing to shuffle around the house while changing diapers. Which begs the question; what kind of elegant robe will Conor McGregor walk out with come fight night?