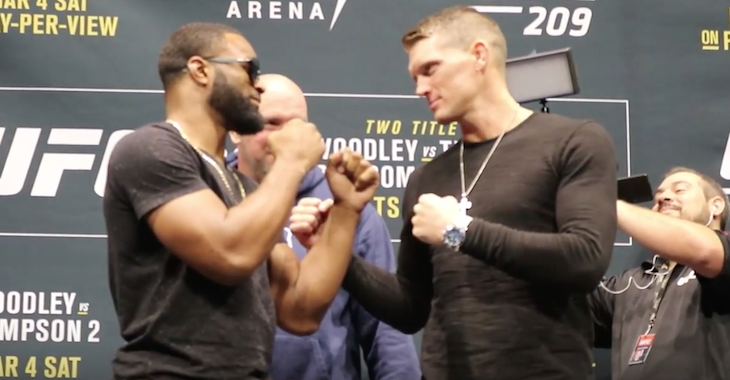 Stephen Thompson is all healed up and ready to spin kick the top five in the UFC welterweight division, all on a journey to get back to a title shot. Tyron Woodley (18-3-1 MMA) successfully defended his welterweight title at last month’s UFC 214 event in Anaheim, defeating top division contender Demian Maia via unanimous decision. Woodley put on absolute defensive clinic to stuff all 21 of the Brazilian submission specialist’s takedown attempts, leaving Maia with a pair of badly swollen eyes to take home with him after five rounds.

When you stuff 24 takedown attempts and make your third successful defense … @TWooodley pic.twitter.com/uC8iHizOGR

Of course, the title fight was met with a ton of criticism. It was all deja vu from Anderson Silva’s lackluster defense against Maia all the way back at UFC 112. Dana White blasted Woodley for “not taking any risks” in the fight and shared his doubts that fans would be interested in seeing Woodley perform again. In a recent interview with BJPENN.com’s Chris Taylor, Stephen Thompson actually came to Woodley’s  defense. He also threw some out-of-character shade at Maia, accusing him of “dumbing down” fights.

“Well I predicted the Tyron was going to do exactly what he went out there and did. Yea the fans weren’t very happy, but it was a very smart fight for Tyron. I mean anybody who steps out there with Demian Maia, it is going to end up being a fight just like that. Demian is not an exciting fighter and he kind of dumbs down the fight when he steps out there with anybody. You have to be so careful because you don’t want him to close that gap. He’s got great timing so if you over extend yourself kicking or punching, he is going to get on your legs and take you down. So, I thought Tyron played a really smart fight. He ended up blackening his eye in the first-round and man he stuffed everyone of Maia’s shots. Which I thought would happen. I mean maybe Tyron could have pressured some more at the end, but on the other side of that you have to be so careful in there with Maia. If you make one little mistake he can take advantage of it and choke you out. So, I thought it was a good game plan and good execution from Tyron, man.” Stephen Thompson reiterated that Woodley’s tactics against Maia are really the only ways to fight him. If going down to the ground with Maia isn’t an all-out death sentence, then it for sure increases his chances of beating whoever he is fighting.

“Here’s the thing, everybody is like ‘get on him, get on him’ when they see Maia go down, but that is exactly what he is waiting on. He is waiting for you to go in for the kill. If you watched Tyron Woodley knock him down in the early rounds, it looked like he thought about jumping on him but then backed off and was like ‘Nah man I’m not going down there with you, stand up’. Which was the smart move. Maia wants you to go down there for ground and pound and that is when he will tie you up. So, in my mind it was a very smart fight for Tyron man. He is definitely an intelligent fighter.”

While it may not be enjoyable to some fans, Thompson sides with Woodley that he was fighting a specialist and needed to put on a performance like that to keep his belt. Do you agree with Thompson’s assessment of the Maia vs. Woodley fight from UFC 214? It’d be interesting to see if Thompson fought Maia the same way. Who knows, we may even get to see it.