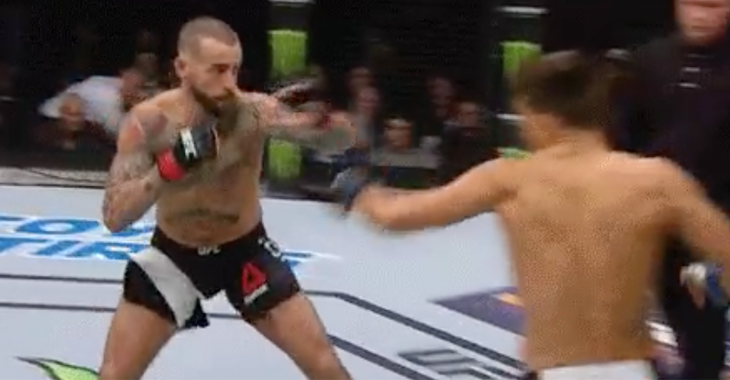 It was a rough night at UFC 203 for Phil Brooks, who is better known by his WWE name, CM Punk.

The former professional wrestler made his professional mixed martial arts debut against 2-0 Mickey Gall in the biggest MMA promotion in the world on the main event pay-per-view card.

Some fighters were upset that CM Punk was given the opportunity to fight in the UFC without even having any mixed martial arts experience. Also the fact that CM Punk ended up making a disclosed salary of $500,000 had some veteran fighters upset. However, some fighters saw it as a good thing with the former professional wrestling star bringing a new audience to watch the UFC.

In the end, CM Punk’s performance against Gall fell short of the promotion put on by the UFC as the former wrestling star threw just a single punch at Gall before being taken down and pummeled by the Brazilian jiu-jitsu brown belt opponent.

That is horrific from CM Punk doesnt get any worse #UFC203 pic.twitter.com/3Jdz0Vycyg

However, after the fight was called to an end at 2:14 of the very first round, CM Punk gave an inspiring message to fans and haters alike.

“In life, you go big or you go home. I just like to take challenges. It was a hell of a mountain to try and climb. I didn’t get to the summit today but it doesn’t mean I’m going to give up. It doesn’t mean that I’m going to stop. I appreciate all the support from everybody. Obviously, Mickey is a hell of a fighter. I will be back, believe it or not. This is the most fun I’ve ever had in my life. Second best night of my life besides marrying my wife obviously.

“I know there is a lot of doubters, but listen life is about falling down and getting up. It doesn’t matter how many times you get knocked down, you get back up. So if there is any kid out there that is told by a parent, or a coach, or a teacher or somebody that they look up to, somebody that is supposed to push them and believe in them and they’re told ‘no,’ don’t listen to them. Believe in yourself. Sometimes, the outcome isn’t always what you desire it to be, but the true failure in life is not trying at all.”