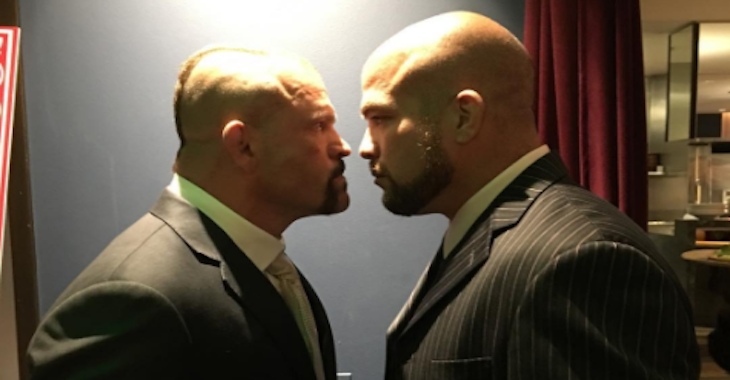 MMA legends Chuck Liddell & Tito Ortiz may both currently be retired from MMA, however the pair recently reignited their rivalry once again. The pair did a staredown photo for media members recently, in a photo that was posted by Liddell captioned: “Why not?”

Ortiz then fired back at his longtime rival, saying: “We took the pic as requested by the media. You knew I was going to post it, u posed for it. I heard you changed for the better but with your lack of class and character i knew it was impossible. Some encouraged me to give you a shot saying Amber changed u. Judging from your tweet you’re still the same piece of shit I’ve punked on numerous occasions. Now we know who the real trash was, you can’t blame @jennacantlose any more. Man up! Now let me borrow some money bitch 😜 where should we meet up I need it soon!”

While a trilogy fight between the pair didn’t materialize, Bellator MMA President Scott Coker admitted that he would be open to putting the fight on, informing MMAFighting:

“If Tito wanted to do it, would I do it?” Coker said. “I think I might do it. To me, why not? If they all pass their medicals and their physicals. It’s a fight that I would love to see. But I think Tito is retired and we’re talking about hypotheticals that [probably] won’t happen.”

Liddell of course recently met with Coker to discuss being a brand ambassador for Bellator MMA, which would see him make appearances for the promotion. That of course could very well lead to a trilogy fight between the pair.