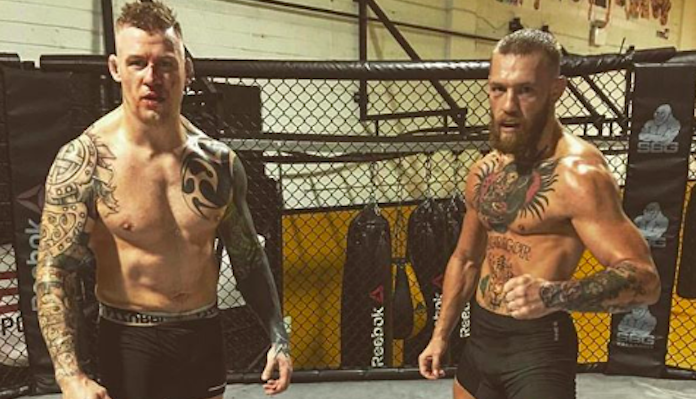 Over the last few weeks, rapper 50 Cent has been tied tightly to Bellator MMA — though nobody is really sure why. Perhaps it’s just a bit of celebrity endorsement. Perhaps 50 is thinking about getting into the promoting game. Or maybe, just maybe, he’s thinking about strapping on some four-ounce gloves and fighting. The rapper has certainly dropped some hints to this end, calling out both Quinton “Rampage” Jackson and Chael Sonnen.

If 50 cent does end up stepping into the cage, Conor McGregor training partner and UFC veteran Charlie Ward is hoping to welcome him. Shortly after he defeated Martin Hudson at Bellator 200 last weekend, Ward issued a fiery callout of the rapper, who was among the many mainstream stars in attendance.

“50 Cent is running his mouth,” A fired-up Ward told the media after his Bellator 200 win (h/t MMAJunkie). “He’s here tonight. He’s saying he’s a promoter. He’s saying he’s a fighter, he’ll fight Conor in the street. He’ll fight this, that. He’s more my stamp – 185. If he wants to come into Bellator, I’ll fight him. That’s it.”

Charlie Ward has gone 2-0 since joining the Bellator roster, thumping Hudson and John Redmond, both in the first round. These Bellator wins were preceded by a tough slam-induced KO loss to Galore Bofando in the UFC, which bookended his run in the Octagon. Ward is currently 5-3 overall.

50 Cent, meanwhile, has never competed in mixed martial arts. Though the rapper could certainly strike it rich pursuing an MMA career, it seems far more likely that he dies trying.