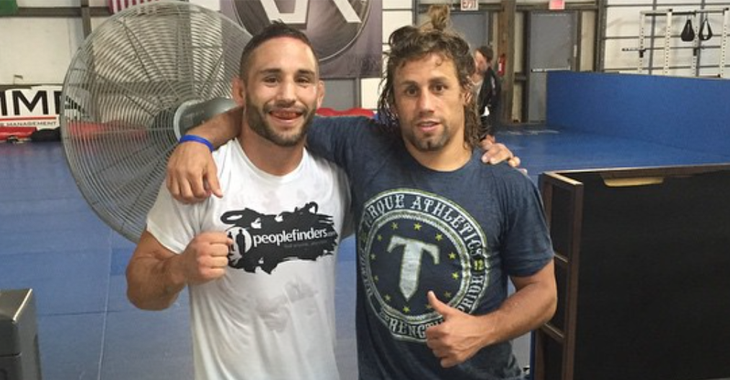 Veteran UFC featherweight Chad Mendes has been in the middle of the drama unfolding between Team Alpha Male star Urijah Faber and former teammates T.J. Dillashaw and Duane Ludwig. Mendes who is on good terms with both sides is sticking with Faber at Team Alpha Male but says that everything has been blown way out of proportion.

“Money” Mendes spoke on the MMA Hour with Ariel Helwani recently and revealed his feelings on the drama (transcribed by MMA Fighting):

“It’s something that’s stressful and stresses me out,” UFC featherweight Chad Mendes told Ariel Helwani on Monday’s edition of The MMA Hour. “It’s something that I don’t like being a part of. I love doing this as a sport. I got into this because I want to compete, and when all this stuff gets thrown into it, it’s not fun for me and it’s something I just don’t want to be a part of.”

Mendes said that going to train with Ludwig and Dillashaw is not something he plans to do.

“I’m not considering it, but I don’t have anything against these guys that want to go over there and train,” he said. “I mean, there is a lot of negativity and stuff being said back and forth and people getting frustrated. And it’s like, everyone is a grown-ass adult and people can make their own decisions and do what they want. I know what I need to do, I know what I’m going to do, and that’s really all it matters in my life right now.

“I don’t feel like it’s a loyalty thing, I mean, that’s them trying to better their lives. That’s what they feel like they need, you know. It sucks just being in the middle of it but there is nothing I hold against those guys. I don’t hold anything against ‘Bang,’ I am loyal to Faber, I love Faber like my brother, but I just basically want to stay away from that whole drama set.”

Mendes seems to be neutral in the strained relationships between the former teammates and wants to avoid taking any sides.

“I just feel like there is just too much drama between everything,” he said. “I don’t have anything against ‘Bang.’ There is nothing in my mind that makes me hate the guy or anything like that. I just feel like with him Faber and the whole drama thing is not worth me getting in the middle of it.”

“It’s like, ‘Dude, you guys are both doing this to each other. Just end it, it’s fine, just go on with your lives. We don’t have to hate each other — we can all still be friends,'” Mendes said.