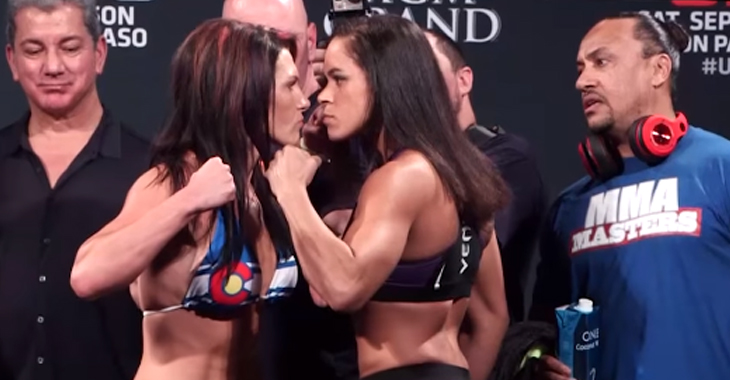 Aside from the announcement of Khabib Nurmagomedov fighting Edson Barboza at UFC 219, news has been quiet for the supposed end-of-the-year super card. If Raquel Pennington hadn’t of broken her leg, we would have already had the card’s first title fight booked. The plan was to have Amanda Nunes defend her belt against fourth-ranked Pennington. Her management team has moved on, stating Nunes will take the rest of the year off and citing a lack of logical challengers. However, Nunes may have her eye on sixth-ranked Cat Zingano after she comes back and grabs a win.

Before Amanda Nunes went on her six-fight win streak and became UFC bantamweight champion, Cat Zingano took her out in the third round at UFC 178. It’s clear that Nunes would like to avenge that loss, that and a combination of her beating most of the competition at bantamweight led to putting Zingano into consideration. Cat Zingano was undefeated until she ran into Julianna Pena and Ronda Rousey, Pena is out until next year sometime and Rousey is someone Nunes already beat.

The bantamweight title shot is a waiting game now, along with a process of elimination. The UFC may look to re-book the fight with Raquel Pennington while Pena does mom duties and Cat Zingano gets booked for a fight. Or, maybe just give Zingano the fight anyway on her first fight back. Other than Zingano, Holly Holm is the only other option, but that’s only if she decides not to fight Cris Cyborg for the featherweight title.

Three years ago today at UFC 178, Cat Zingano pounded out Amanda Nunes in the third round. Zingano is the last woman to beat Nunes. pic.twitter.com/mgY1XbMnOB