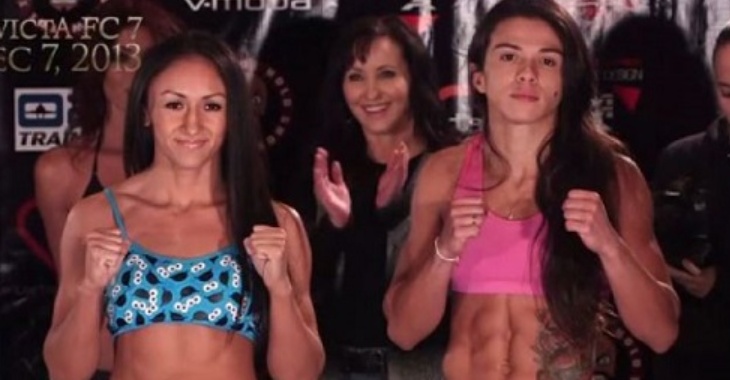 The strawweight division’s oldest matchup is finally set to take place again. Former UFC and Invicta FC champion, Carla Esparza and former title challenger, Claudia Gadelha will get another chance at getting to hurt each other. The two are set to due battle at UFC 225 in Chicago, Illinois. But as history shows…this isn’t the first time we were supposed to see these former top 2 115-pounders clash.

Going back to the early days of Invicta, Esparza and Gadelha were the clear two very best strawweights on the planet so it only made sense for them to square off for the world title. Which was Invicta’s plan. So they booked the two for Invicta FC 4 to crown their inaugural strawweight champion. Gadelha suffered a broken nose prior to the fight and was unable to compete thus bumping Bec Rawling into her place to fill in.

Esparza would defeat Rawlings by unanimous decision and be crowned the first ever Invicta 115 champion. Invicta FC 7 marks the second event that the two were set to fight at. Each made it to weigh-ins and made the championship mark. But…Gadelha fell ill and couldn’t make it to fight night.

Now they’re set to do it again(barring no injuries, etc…). It’s been a long time in in the making and Esparza is just ready to get it over with as she told MMAJunkie Radio:

“I’m so excited. This is actually the third time this fight was supposed to happen so it’s been a long time coming. I’m just excited it’s going to happen. She’s always been like a big trash talker and we’ve had our Twitter wars which came from nothing back in the day. Up until recently, she’s either talked shit about me and stuff on her Instagram, like calling me names and all these things about me.

Even just last year, out of nowhere, talking crap about me and then right now I think she called me a dumbass and another post where she called me a little girl. It’s just her trash talking, I didn’t say anything about her I was ‘Yay, this fight is finally going to happen,’ and she was just like this, this and this, ‘see you in Chicago, you can’t run anymore dumbass.’ So I’m just like alright. You know, if we didn’t have USADA in the picture, I’d call roid rage.”

Esparza and Gadelha have had opposite trajectories as of late with Esparza riding a two-fight winning streak and showing off some improved boxing skills while Gadelha was recently beaten decisively by one half of this Saturday’s UFC on Fox 28 co-main event, Jessica Andrade. The loss was Gadelha’s first to someone other than Joanna Jedrzejczyk.

Who will come out on top in this old rivalry?