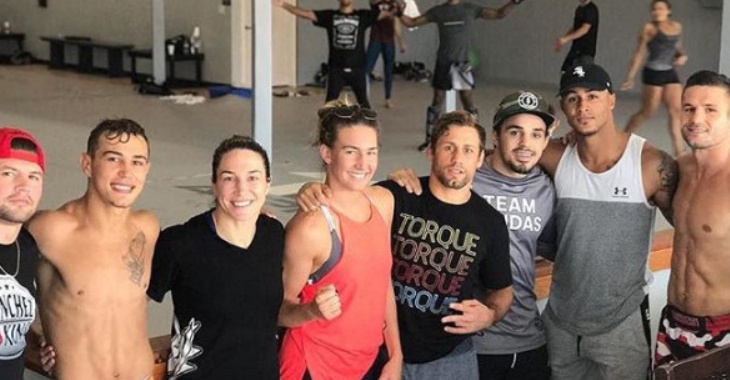 Don’t let that headline fool you. It’s not how it sounds…sort of.

Since transitioning over to Team Alpha Male(TAM), former bantamweight title challenger and Olympic silver medalist, Sara McMann has shown great improvements in her all-around game. Something that she massively credits to her new coach, TAM owner, Urijah Faber as she told MMAJunkie:

“Camp was super difficult. It’s not that I hadn’t experienced it before, every different type of way I could be in bad position and dogfight my way out of it, that’s what it was. While you’re going through it, you just have to keep pushing yourself and rallying, and it seems like it’s never-ending. I was like, ‘Man, Urijah Faber is a freakin’ slavedriver,’ and he was. He was like, ‘I don’t care, do more, I don’t care, push harder. OK, time to go, OK, go faster. Nope, do it again, do it faster’. And I was just like, ‘Oooh, I wanna kick him, I just wanna miss the pads one time.’ At the end, I was like, ‘Thank you.’ That’s the best time of training. Now I get to reap the rewards of all that work. Now I’m good. My boyfriend was like, ‘You’re gonna love him when you go out there and win.’ I’m like, ‘I’ll hate him slightly less.’ *laughs*

If I don’t look across while the practice is going on and wish I could set my coach on fire, it’s not the right camp. That’s what his job is. His job is to bring out every bit of talent and hard work and every bit of will inside me and push it to its maximum. He did it, and he did a great job. You’re finding your breaking point, and you’re pushing that point back.”

McMann holds an 11-4 career record and is 4-4 in her UFC tenure. She has been one of the very best 135ers on the planet since the UFC absorbed Strikeforce, bringing over the bantamweight division.

After three straight dominant victories, McMann had her sights set on another title shot but those were halted by the rising contender, Ketlen Vieira at UFC 215. Something that McMann isn’t too worried about affecting her going forward.

“I have full confidence I’ll be back on track. The first round of that fight went exactly how I wanted it, and the second round didn’t and that sucks. But it’s very different from going in there and having a sour performance. Making a mistake is different from having a full bad performance… You realize you’re a millimeter off. You’re two millimeters off. You’re not inches off, and you’re definitely not miles off. Even after I win, I go back and pick apart the things I did wrong or things I didn’t like.

Winning or losing doesn’t have as much effect on the process because that competition is done, and I think I learned in wrestling how to quickly put everything behind me and focus on what I need to do to improve. I never, ever have a perfect fight. It doesn’t matter how short it is – there’s something I didn’t do or expected to do or wanted to do. So I have work to do. It’s the same thing for me.”

McMann is back in action this Saturday for UFC on Fox 28 in Orlando, Florida when she takes on Marion Reneau.