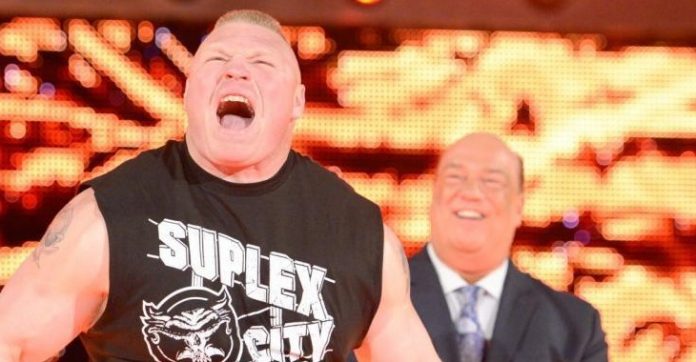 It seems like athletes jumping over from the WWE to the UFC is becoming a little bit of a norm… And that all started with the former UFC heavyweight champion and current WWE Universal champion, Brock Lesnar.

He was really the first to do both and find success in each. Most recently, we’ve seen what could be considered a ‘trade’ of sorts between the once UFC bantamweight queen, Ronda Rousey and the former WWE megastar, CM Punk who are both now on the opposite rosters in which they made their claims to fame.

Whether those two will have success in their new career paths or if they’ll end up returning to where they started is still to be determined. For Lesnar though, he has already alternated between sports and it looks likely that he’ll do so again at some point. UFC President, Dana White has even said that there is a ‘very, very, very good’ chance that we will see Lesnar in the octagon again.

Now recently after speaking with Newsweek, Lesnar’s longtime good friend and on-screen manager, Paul Heyman opened up to let it be known that there is indeed interest from Lesnar’s side as well.

“I don’t think it’s any secret that Brock is looking to get back into the Octagon. He is obviously eyeballing another fight in UFC. There’s no secret. He’s posing for pictures with Dana White wearing a UFC shirt in the UFC offices in Las Vegas. That’s not a negotiating tactic, Brock Lesnar wants to compete inside of the octagon. There’s no leveraging that; it’s a fact.

We both have a number of projects we have been interested in pursuing that will start to kick off after WrestleMania. That doesn’t mean Brock Lesnar can’t retain the title and we do those other projects simultaneously in a continued run as Universal Champion. The proof I offer to you is Brock Lesnar fought Mark Hunt at UFC 200 and, six weeks later, main evented SummerSlam against Randy Orton.

Brock Lesnar can do both and he has proven that time and time again. And I’ve been the co-founder and co-running my agency since I came back in 2012. I’ve been working on outside projects this entire time, so we can certainly walk that line when it comes to working in WWE and other projects. Mine is entertainment-based, Brock’s is beating the hell out of someone in the octagon.

The question posed is ‘are you willing to get into the octagon?’ and fight and I would suggest Brock’s answer to that is ‘yes, I am.’ Now, when will it take place, against who and where? These are just details. The big question has always been ‘are you willing to do this?’ And it’s pretty apparent that Brock Lesnar is.”

Lesnar last competed at UFC 200 in July of 2016 when he took on and initially defeated Mark Hunt by unanimous decision. The fight was eventually overturned to a no contest after Lesnar tested positive for Clomiphene.

At age forty, Lesnar’s MMA record sits at 5-3. With the heavyweight division finally starting to develop and create some new life, do you have any interest in what appears to be an inevitable Lesnar return?