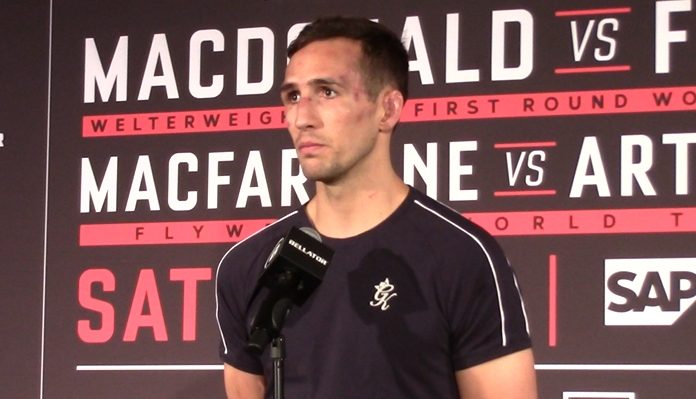 Ever since his contentious Bellator 220 draw with Jon Fitch, there’s been some question about what the future holds for Bellator welterweight champion Rory MacDonald. Much of that uncertainty stems from the comments he’s made about his flagging urge to hurt people.

Speaking on Ariel Helwani’s MMA Show on Monday, MacDonald added a bit of clarity to the situation. He explained that, since rediscovering his faith, he no longer feels the anger he once did when he steps into the cage.

“I felt like I was unsure of the emotions I was feeling in the fight,” Rory MacDonald said (transcript via LowKickMMA). “For the longest time, I fought with a certain anger inside of me so it was kind of like a release. I felt good to fight, to do damage and it made me feel better about myself in some kind of a way.

“So it’s kind of weird to go into a fight and not go through the same emotions that I’m used to feeling. So I guess I was just caught up [during the post-fight interview] thinking about why I’m feeling like this, what am I doing here? I was just not sure what to make of it.”

With his draw against Jon Fitch, Rory MacDonald separated himself from a tough, TKO loss to reigning Bellator middleweight champion Gegard Mousasi. In his next most recent fight, he defeated Douglas Lima by decision to win the Bellator welterweight title.

Having scraped by Fitch, he has advanced to the second round of the Bellator Welterweight Grand Prix. The next item on his agenda is a June title defense opposite BJJ specialist Neiman Gracie.