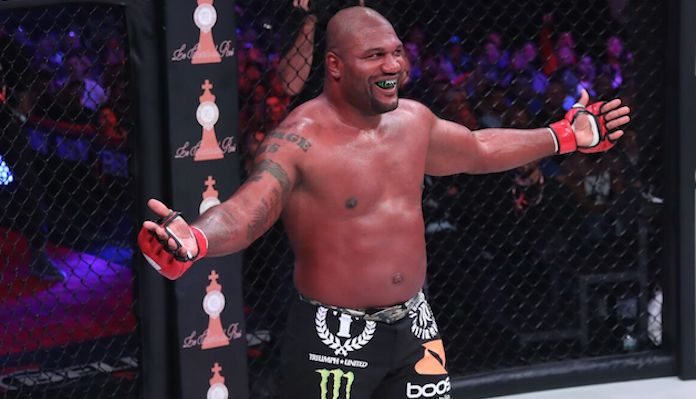 McKee defeated Patricio Pitbull via first-round submission on Saturday night in the main event of Bellator 263 to claim the promotion’s 145lbs title, and the $1 million grand prize for winning the Bellator Featherweight World Grand Prix sixteen-man tournament. Now a perfect 18-0 in MMA, McKee appears to be a superstar for Bellator for years to come. It hasn’t come out of anywhere either, as the son of former UFC fighter Antonio McKee was always considered a natural in mixed martial arts, training under his veteran father.

The older McKee, the leader of Team Bodyshop MMA in California, has trained numerous big-name fighters before his son, including a pair of UFC legends in Rampage and Liddell. In fact, Rampage and his son, Raja the Clone, are still training at Team Bodyshop. Rampage’s son is set to make his amateur MMA debut soon, while his father — who hasn’t fought since a knockout loss to Fedor Emelianenko in 2019 — could make a comeback.

Speaking to MMA journalist James Lynch, McKee hinted that Jackson could be making a comeback at age 43, and if he wants to fight again, he expects his father to train him.

“I think he might be making a comeback. Everybody comes to Team Bodyshop for that fine tuneup, including Chuck Liddell. I think that’s a big accolade to work with Chuck Liddell in his very last fight. That kind of says something about who my father is as a trainer, for Chuck to come and train with us. Rampage, we’ve got his son as well, Raja the Clone, he’s got his first amateur as well coming up next month,” McKee said.