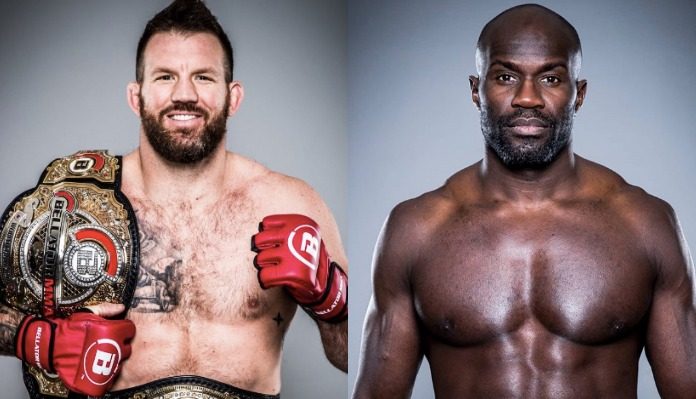 Ryan Bader put his heavyweight title on the line against Cheick Kongo in the headliner of tonight’s Bellator 226 event in San Jose.

Bader (27-5 MMA) had captured the promotions vacant heavyweight title this past January at Bellator 214, defeating MMA legend Fedor Emelianenko by first round knockout.

Tonight’s Bellator heavyweight title tilt was being dominated by Ryan Bader in the early moments before an accidental eye poke resulted in the fight being called off. Due to the nature of the incident the bout was ruled a no-contest.

Check out how the pros reacted to the Bellator 226 main event below:

The Ryan Bader v Cheick Kongo heavyweight title fight is going to be ruled a NC after an accidental eye poke from Bader left Kongo unable to see out of his left eye. He seems to be in a lot of pain.

He knew exactly what he was doing. Bader is a coward,he was clearly winning the round,why eye poke🤷🏾‍♂️ hope my brother @WinbackUSA heals fast and that it’s not a bad injury.😡🤬@bellatormma FYI it should’ve been a… https://t.co/lSERiKKHcY

Would you like to see Bellator book a rematch between Cheick Kongo and Ryan Bader? Sound off in the comments section PENN Nation!