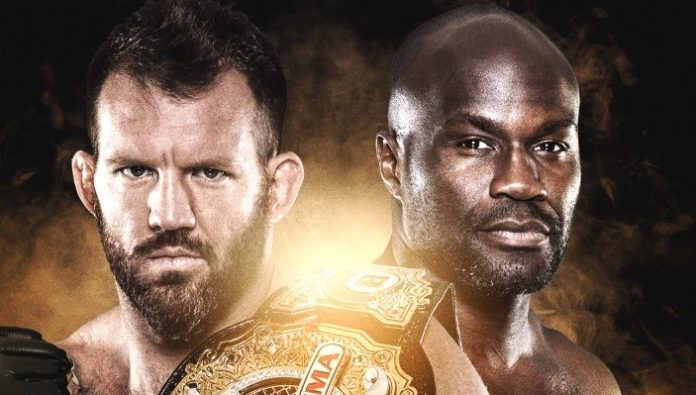 Ryan Bader puts his heavyweight title on the line against Cheick Kongo in the headliner of tonight’s Bellator 226 event in San Jose.

Meanwhile, Cheick Kongo (30-10-2 MMA) will enter tonight’s championship contest on an eight-fight winning streak, his latest being a decision victory over Vitaly Minakov at Bellator 216.

Tonight’s Bellator 226 main event unfortunately ended due to an accidental eye poke from the current champion. The fight was waved off and subsequently ruled a no-contest. Prior to the fight-ending strike, Ryan Bader was getting the better of Cheick Kongo. Upon replay, it appeared that it was actually a punch that caused the damage, but nonetheless this is a no-contest. Let’s see if an immediate rematch is booked by the promotion.

Get all of the Bellator 226 Results below:

Ryan Bader vs. Cheick Kongo — Ends in a no-contest (eye poke?)
Daniel Straus vs. Derek Campos — Campos def. Straus via unanimous decision (30-26, 30-25 x2)
Pat Curran vs. Adam Borics — Borics def. Curran via TKO at 4:59 of Round 2
Emmanuel Sanchez vs. Tywan Claxton — Sanchez def. Claxton via submission (triangle) at 4:11 of Round 2
Sam Sicilia vs. Pedro Carvalho — Carvalho def. Sicilia via submission (neck crank) at 1:26 of Round 2

Would you like to see a rematch of tonight’s Bellator 226 event in San Jose? Sound off in the comments section PENN Nation!