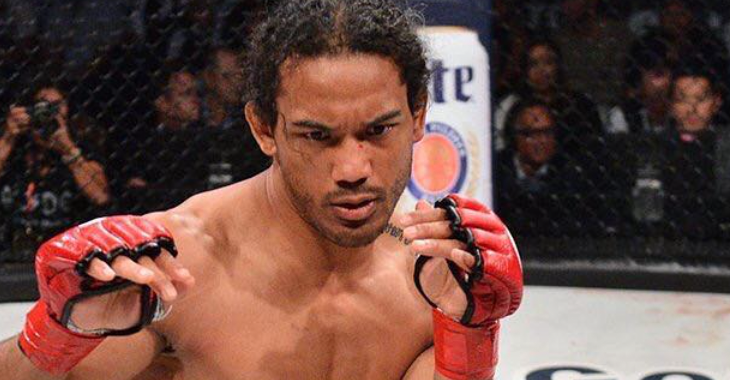 Benson Henderson (25-8 MMA) was last seen in action at Bellator 196 where he scored a second-round submission win over Roger Huerta. “Smooth” has gone 2-3 since joining the Bellator ranks in April of 2016.

Round one begins and Henderson lands a low kick. Saad responds with a front kick and then a low kick of his own. Benson is circling along the fence. Saad lands another low kick. Benson responds with a kick to the body. Saad presses forward and lands a body kick of his own. A lot of pressure from Saad Awad early here. Benson is still looking to find his range. He partially lands a high kick but Saad quickly replies with a good kick to the body. Benson moves along the fence and then leaps forward with a hard low kick. Saad rushes in now but Henderson uses his momentum to shoot in and land a takedown. “Smooth” is working from half guard. He lands some short strikes. Saad scrambles and gets back to full guard. Another scramble and Benson Henderson is able to take Saad’s back. He locks in both hooks and begins working for a rear-naked choke. Saad scrambles and gets out of trouble. Benson eventually retakes top position and works in some shots. He moves to the back of Awad but once again fails to lock in a submission. Round one comes to an end.

Round two begins and Henderson lands a low kick. He immediately follows that up with a flying knee attempt that just misses. Awad takes the center of the octagon but it is Henderson who lands a pair of body kicks. Saad continues to chase “Bendo” down and lands a front kick to the body. Awad with a jab. Henderson just misses with a high kick. Benson Henderson leaps in with a right jab and then a straight left. He shoots in for a single leg takedown but Saad scores a beautiful sweep to avoid hitting the canvas. Henderson hangs on to Awad’s leg and eventually is able to drag him down to the canvas. He begins landing some good shots to the body from half guard. Benson Henderson is looking to move to full mount but Saad explodes in an attempt to avoid the position. Henderson moves to his back and then retakes top position. The former UFC lightweight champion begins landing some elbows from half guard. Saad scrambles but gives up his back. Punches now from Henderson. Saad again is forces to scramble and winds up on his back with Benson Henderson in half guard. “Bendo” locks in an arm triangle and moves to mount. This choke is tight. Luckily for Saad the horn sounds before Henderson can secure the finish.

Round three begins and Henderson lands a heavy low kick to start round three. He follows that up with a kick to the body of Saad. Henderson misses with a spinning head kick and then shoots in for a takedown. Saad defends the shot and fires off a knee. Henderson squares up and then shoots back in for another takedown attempt. This time he gets it. “Smooth” begins landing some good right hands while trapping one of Awad’s arms. He switches to elbows and then moves back to punches. Saad is trying to strike back but he is not winning the battle here. Benson gets warned for grabbing the fence and the referee stands them back up. Upon restart Benson Henderson lands a nice kick to the body of Awad. He circles and then lands a left hook. Saad tries to press forward but Henderson just shoots in and presses him back against the cage. Under two minutes remain. Both men lands knees from the position and then proceed to break. Saad comes forward with a right hand that partially connects on Henderon while Benson was attempting a low kick. Henderson falls to the floor but pops right back to his feet. He immediately shoots in and scores a takedown. He moves to mount and looks to secure an arm triangle choke. Saad does a good job of defending. Henderson looks for a rear-naked choke but the horn sounds to end the fight.