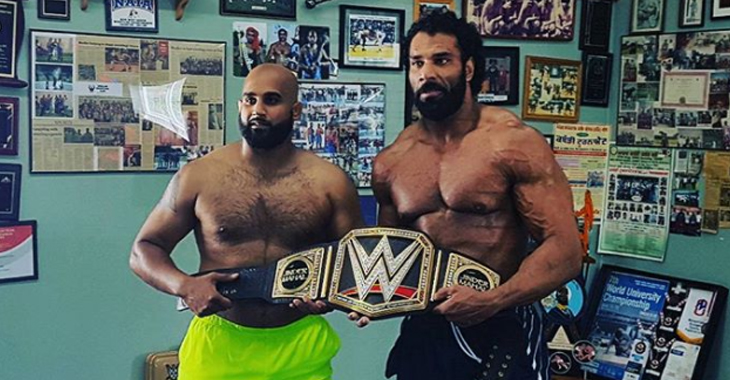 This weekend, on the undercard of UFC 215, undefeated heavyweight prospect Arjan Bhullar will make his anticipated debut in the Octagon opposite Brazil’s Luis Henrique. Bhullar’s debut will be a historic one, as he’ll be the first Indo-Canadian fighter to step foot into the Octagon. According to a recent report from Chamatkar Sandhu, Bhullar will be walked to the cage by another Indo-Canadian sports star in WWE Champion Jinder Mahal.

Just spoke to Arjan Bhullar (@theone_asb) who told me it's 100% confirmed. @JinderMahal will walk him out to the Octagon at UFC 215.

Earlier today, on the TSN MMA Show, Bhullar explained how this awesome arrangement came to be.

“We’ve known each other about 10 or 12 years,” he said (h/t MMAUno.com). “So I was wrestling in university at Simon Fraser here in BC and he was on the regional scene trying to break into pro for wrestling–that’s when we first hooked up.”

“It’s cool man,” he continued. “We’ve kinda kept in touch ever since and now I’m up in the UFC and he’s a champ up there [WWE]. It was just a natural fit with the crossover appeal and everything that’s happening in the sport right now. I thought why not. He’s a native Albertan, born and raised in Calgary.”

When we as a people can genuinely support each other amazing is possible. I was able to watch The Maharaja do his thing in Vancouver and now I'm excited to announce @wwe Champ @jindermahal will be taking time away from his busy schedule to accompany the Team for my debut fight in his home province of Alberta. Shout out to the boss @danawhite for hooking up the VIP treatment #indian #onebillionstrong #punjabi #pride #support #loyal #humble #respect #wwe #ufc

“When we as a people can genuinely support each other amazing is possible,” he said in his post. “I was able to watch The Maharaja do his thing in Vancouver and now I’m excited to announce [WWE] champ [Jinder Mahal] will be taking time away from his busy schedule to accompany the team for my debut fight in his home province of Alberta. Shout out to the boss [Dana White] for hooking up the VIP treatment.”

Arjan Bhullar is 6-0 as a pro mixed martial artist. He as finished three of his pro bouts by TKO, and won three by decision.