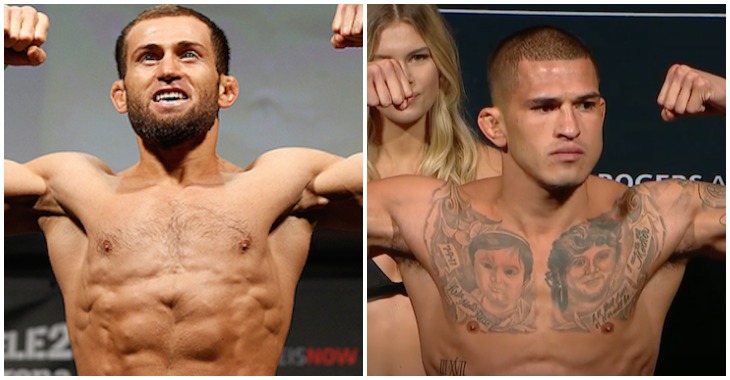 Chechen-Austrian talent Mairbek Taisumov is one of the hottest prospects in UFC lightweight division. For the reasoning behind this claim, look no further than his four most recent fights in the Octagon.

First, he put away Marcin Bandel with punches just 1:01 into the first round of an October 2014 bout. Then, he knocked Anthony Christodoulou out cold just 38 seconds into the second round of a January 2015 fight. Next, in June of 2015, he thumped Alan Patrick to a second round TKO. Finally and most recently he returned from a long layoff to TKO Damir Hadžović in the first round. Now 4-0 in his last four, with finishes in all of those fights, the rising lightweight is undeniably ready for a big step up – and it sounds like he’s about to get one.

On Sunday afternoon, Taisumov took to Twitter to tell Anthony Pettis to hurry up and sign his contract, which of course implies that the UFC is working on a fight between the two dangerous finishers. See this Tweet below:

“Tired of waiting, when is he signing the contract?” Taisumov asked in his Tweet.

While Taisumov has been on a real streak recently, Pettis has been enduring a bit of a rough stretch.

After losing the UFC lightweight title to Rafael Dos Anjos, the Milwaukee native gave up back-to-back decisions to Eddie Alvarez and Edson Barboza. This three-fight losing streak prompted him to drop to featherweight. He debuted in this new division with a nice win over Charles Oliveira, which gave the impression that he’d found a new home. Unfortunately, he then missed weight for an interim title fight with Max Holloway, only to succumb to strikes in the third round. After this loss, Pettis announced his intention to return to lightweight, explaining that the cut to featherweight was too much for him.

If Anthony Pettis signs a contract to fight Mairbek Taisumov, who do you think comes out on top? Sound off, PENN Nation!