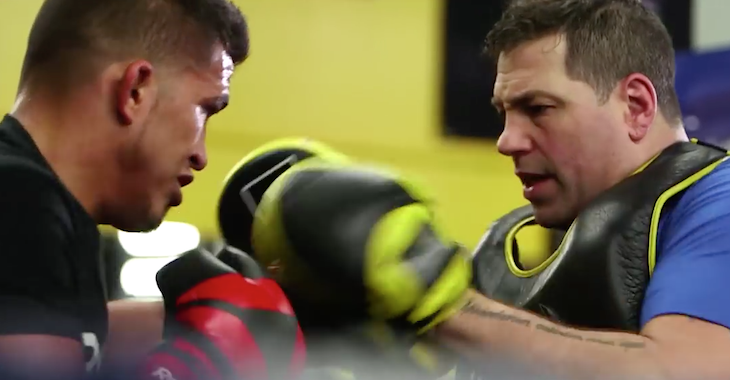 Last month, former UFC lightweight champion Anthony Pettis dropped down to featherweight and scored a career-saving win over Charles Oliveira. Had he lost the fight, he’d have found himself on a dangerous four-fight losing streak – the kind of skid that has ejected many fighters from the UFC in the past.

As it turns out, however, Pettis didn’t only save his own career by defeating Oliveira. He also saved the career of his long-time coach Duke Roufus, who joined Ariel Helwani on this week’s episode of The MMA Hour.

I’ve only told a couple people this: Anthony, one of my really good friends in Canada, and one of my business partners,” Roufus told Helwani on the show. “If Anthony Pettis would have lost his last fight, I was going to stop coaching. He had his back against the wall, so I had my back against the wall. I’m serious. That’s how much this kid’s life and career means to me. That’s how invested I am as a coach.

I take responsibility for winning and losing when I’m coaching,” Roufus added. “I’m the kind of guy where I want to be in the trenches with my people.”

Thankfully, Pettis came out on top, extending his own career, and apparently, that of one of MMA’s great coaches. And now that Pettis is back on track, Roufus said he could not be more optimistic about the future.

“I just want see him shine, and he did,” Roufus told Helwani. “I feel like the next phase of his career is a special one.”

Precisely what the future holds for this resurgent, featherweight Pettis remains a mystery. Yet it’s beginning to look like the former lightweight champion might find himself in a fight with Max Holloway in New York City on November 12.

How do you think Pettis will do at featherweight? Is he capable of wearing gold again? Sound off, PENN nation!