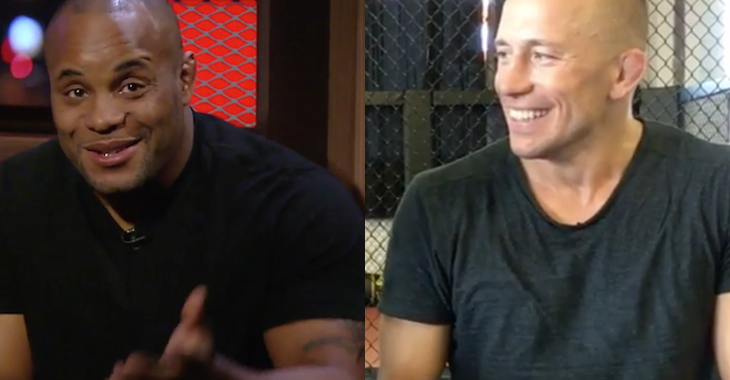 UFC light heavyweight champion Daniel Cormier is set to defend his title against Anthony Johnson at UFC 206 on December 10. The pay-per-view card is taking place in Toronto, Canada and many were expecting the return of former UFC welterweight champion Georges St-Pierre to be announced for the card.

However, on Monday, St-Pierre announced on The MMA Hour that he and his legal team were unable to come to an agreement for a return fight and was released from his contract with the UFC. Daniel Cormier may have been the most disappointed to hear the news. The UFC light heavyweight champion spoke with The Fight Network recently and expressed how not having “GSP” on the card with him will be a major financial letdown.

“Financially it’s a ton,” Cormier said about not having St-Pierre on the card (transcribed by FloCombat). “I know what me and Anthony did at UFC 187 numbers wise, and we made some money, but not what we would’ve made if Georges St-Pierre had fought. For me it’s tough. I really hope they get this figured out so that the fight can be as big as UFC 200. Cormier mentioned that many fans may try to save some money for the big cards that run next to UFC 206. With the stacked UFC 205 card taking place in New York with three title fights and UFC’s biggest draw, Conor McGregor headlining, you know that one will be massive in terms of numbers. Then, immediately following UFC 206, Ronda Rousey makes her much-anticipated return at UFC 207 to fight Amanda Nunes for the women’s UFC bantamweight title.

“I hope it gets worked out because financially it’s a big difference,” Cormier said of the contract issues and negotiations between the UFC and Georges St-Pierre.