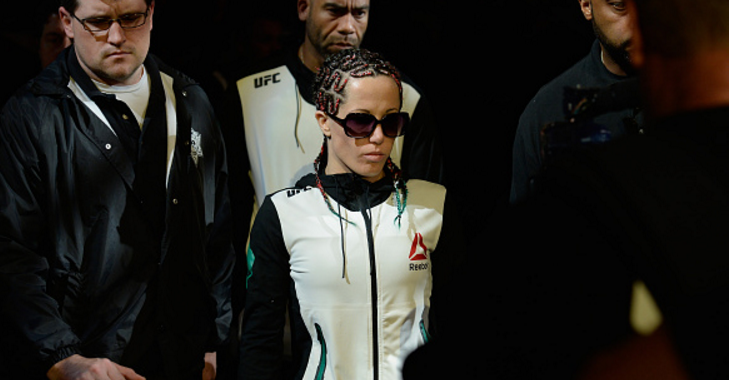 Angela Magana has had quite a unique journey with the Ultimate Fighting Championship as well as just her career in MMA. Ranging from events such as verbally submitting to Jessica Aguilar in a 2008 fight after getting blood in her eye to getting into an altercation with UFC Featherweight champion, Cris Cyborg at the UFC Performance Institue during the 2017 Athlete Retreat…it’s been quite a crazy ride for the former The Ultimate Fighter season 2o contestant.

Magana last fought at UFC 218 this past weekend against Amanda Cooper. Magana lost via second-round TKO thus extending her UFC losing streak to three straight(five overall and six including TUF 20) which was just too much for the organization to keep the twenty fight Strawweight veteran.

I immediately asked for a rematch with #ufc and they have released me after dropping 3 losses in a row. I'm thankful for the opportunities afforded to me through my journey with @ufc and am currently headed to the gym to train for my next win. #yourmajesty

Magana has never been one to be shy with her words as she recently spoke to us at BJPenn.com on BJ Penn Radio where she addressed her haters and how misunderstood she feels:

“I’m so misunderstood, but who wants to be understood by the asses?” Magana said on the latest episode of BJ Penn Radio “Who wants to be misunderstood by the masses? I don’t. Like I give a fuck what anybody thinks about me. People who know me, who’ve ever interacted with me, ask anybody who has ever actually met me and had a conversation with me. They fucking love me. Everybody else can believe what they want online.”

“All these people, they’re unhappy because they go to nine to five jobs, they live in their safe zone, and they’ve never dared to venture out and do something like fighting, or do something where they might lose in front of a million fucking people. So the fact that I can have the balls to venture out and do those things, and get on a stage like that, or say what I want… I’m not like fucking Paige VanZant. They already told us that they want a good role model. When I was on TUF 20, they were like, “If you wanna be [the next] Ronda Rousey, be a good role model. Don’t be the bad girl.” I was like, ‘I’m just gonna be me, fuck it.’”

As you can see in Magana’s tweet, she says she “immediately asked for a rematch”. Which is understandable after hearing how she felt about the stoppage:

“I feel like the fight was stopped early,” Magana explained on the latest episode of BJ Penn Radio. “I remember my corner saying 28 seconds, and there were less than 30 seconds. Yes, [Cooper] was bashing the shit out of me, but I was fully with it. I was fully aware of what was going on. As soon as it stopped I was over with the referee just seeing the replay. I put my hands out like what the hell? But that’s his decision. You have to respect his decisions. I felt like if I could have got a third round, and my corner said, ‘whatever you do, don’t go to the ground, stand up [with her].’ I might have pulled something out of somewhere, I don’t know, to be able to win it. Who knows, but it was stopped a bit early. I feel like that’s the thing with women’s MMA. That they always stop us early in comparison to the men.”

“I understand [the referee is] doing his job, and he’s doing what’s in my best interest, but I feel like, he knew there was only 30 seconds left,” Magana continued. “I feel like I could have waited it out. I’m sitting here fine today, totally with it. Nothing wrong with me, black eye, some swelling in my cheek. I was never even bloody. No blood, there was not even a hit hard enough to make me bleed, so why didn’t he let the fight go on?”

“The thing that I noticed with the WME IMG taking over, I thought they started letting these fights go more than they used to. I thought that was something maybe that they did to push these guys to be aggressive. But it’s always been the same thing with the women’s fights. I’ve said it before, and I’ll say it again, next time, do I need to put a banana in my fucking shorts, and get a crew cut, so they think I’m a fucking dude and let the fight go?”

What are your thoughts on Angela Magana’s release from the UFC?