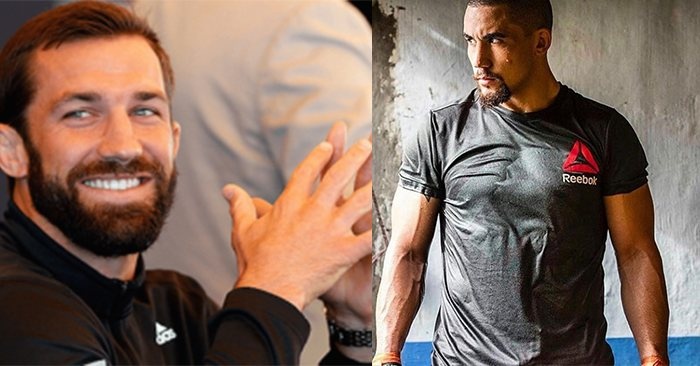 There were rumblings and rumors floating around about this fight potentially coming to fruition. Especially after current UFC Middleweight champion, Georges St-Pierre’s recent news regarding whether or not he’ll come back to the division where he said, “I don’t think so”.  GSP is battling ulcerative colitis anyway so prior to his recent interview it was expected that the Interim champion, Robert Whittaker would indeed defend his title before challenging for GSP’s anyway.

But now everything is set. Ariel Helwani broke the news that former UFC and Strikeforce Middleweight champion, Luke Rockhold would be the next man to challenge for a UFC Middleweight title.

Luke Rockhold returned to the octagon in September after having not fought since he lost the title to Michael Bisping at UFC 199 in June of 2016. Rockhold faced top Middleweight and former World Series of Fighting Middleweight and Light Heavyweight champion, David Branch. Rockhold won the contest in the second round via submission to strikes.

The UFC’s first-ever Australian champion, Robert Whittaker has been sidelined with ligament damage in his knee that he acquired in his title-winning effort over Yoel Romero at UFC 213. Whittaker was entirely expected to take on the then champion, Bisping after winning the title but the injury was too severe to jump back in at the time the UFC wanted and they chose not to wait for the newly crowned Interim champion. Which lead to St-Pierre’s incredible return at UFC 217.

Whittaker vs Rockhold may very well be the greatest matchup you can make at 185 lbs right now so there is no doubt that this will be a fantastic fight. Rockhold has wanted to get back in the title picture as quickly as he possibly could and has been very vocal about with his displeasure towards the current state of the division. Surely, this is a step in the right direction and who knows, by the time the fight ends up happening it may very well be for the undisputed championship.