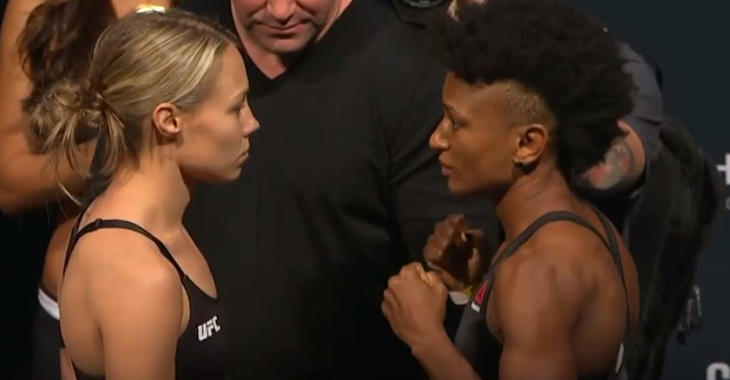 Before making her return to the UFC, Angela Hill strung together a four-fight win streak and captured the strawweight title in Invicta FC. The last loss she had before leaving the organization was against Rose Namajunas. That was only two years ago, but it’s wild to see how much has changed within that short time. While Hill is still unranked, her plan is to stack some wins together to eventually have a chance to avenge her loss to the new UFC strawweight champion.

“I’ve always wanted my rematches, but I wanted to make sure that I was ready when I did have those rematches. You know, everyone’s on the list that I’ve lost to when it comes to that. But I definitely feel like I was a totally different fighter when I did fight [Rose Namajunas]. I was motivated to fight [Joanna Jedrzejczyk] when she was champ. I was hoping that I could work my way up to that. I was already thinking about what I was going to do for the face-off and everything. But now that she’s out of the picture, she’s still going to be around. I’d still love to fight her at some point. Yeah, I’m definitely going for that title run after I feel I’ve got enough wins, and I’ve impressed enough to get a go at [Namajunas].”

“It was surprising and not, because I’ve been on record saying that Joanna was an easier fight for me than someone like [Jessica] Andrade. When you’re used to striking for so long, you see things that other people don’t see. It’s the same why if I’m grappling with Jessica Penne, she can twist me up in all sorts of ways because she sees things that I don’t see. And whenever I watched Joanna strike, I’m just like, ‘Man, they’re so many things that can be exploited but every one spends all this energy trying to take her down.’ But at the same time, I thought that Rose was going to go in there with the same strategy: Try to take her down, spend all this energy doing that and not have enough speed to actually hurt her when she does get dropped, because she’s got dropped a lot in the past.” — Angela Hill speaking to MMA Junkie.

Rose Namajunas was a huge underdog in the fight with Joanna Jedrzejczyk, but she clearly saw the openings others haven’t before. No matter who counted her out or even said she didn’t belong in there against Jedrzejczyk, anyone at this level can take anyone else out on any given night if they are given a chance. Which is what Angela Hill is back to battle for: Her chance. Hill will continue her climb to bigger and better things against Nina Ansaroff tonight at UFC Norfolk.