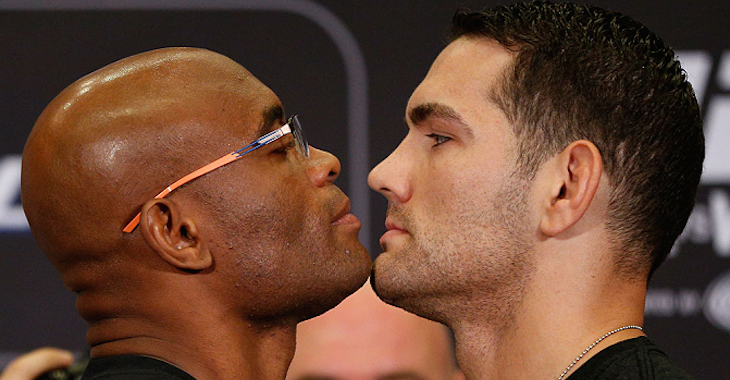 When Chris Weidman stepped into the Octagon to face Anderson Silva for the UFC middleweight championship at UFC 162 in 2013, he shocked the world as he knocked ‘The Spider’ out cold in the second round.

As if that moment wasn’t horrible enough for ‘The Spider,’ in their rematch at UFC 168, a checked leg kick from Weidman left Silva on the canvas with a broken leg.

When Silva returned to the Octagon following the leg break, he defeated Nick Diaz via unanimous decision, however the win was overturned to a no-contest after Silva failed a pair of drug tests. After Silva’s suspension was up, he fought Michael Bisping in the main event of UFC London, where he was defeated by unanimous decision.

He explained to Fox Sports:

“To tell you the truth, absolutely,” Weidman told FOX Sports when asked if he altered Silva’s entire future with that first knockout. “Go back to his other fights, he put his hands down, he let people hit him. People thought his chin was indestructible. He probably thought that, that’s why he had his hands down and fought so confidently. After I knocked him out the first time, it’s a loss, whatever, and we go back in there the second time and I’m in the clinch with him in the first round of the second fight and I come with a right hook to the temple, it wasn’t the biggest shot in the world and he dropped.

“At that moment I’m like his chin from that last knockout, something happened to it, it’s not at strong as it used to be. I remember going to the second round right before his leg broke, just standing with him and I could see almost the fear and the uncertainty in him.”

“He goes from that fight with a broken leg, a year off, goes in against Nick Diaz and he’s not pulling the trigger. He’s scared,” Weidman said. “First time I’ve ever seen him like that. He’s a little scared of getting hit because I feel like he realized it’s possible for him to get dropped and knocked out and put to sleep.

“So I think for sure my fights with him have changed him.”

Despite the loss to Bisping, Silva has maintained that he isn’t retiring yet. With that being said, there’s no shortage of fighters calling out Silva.