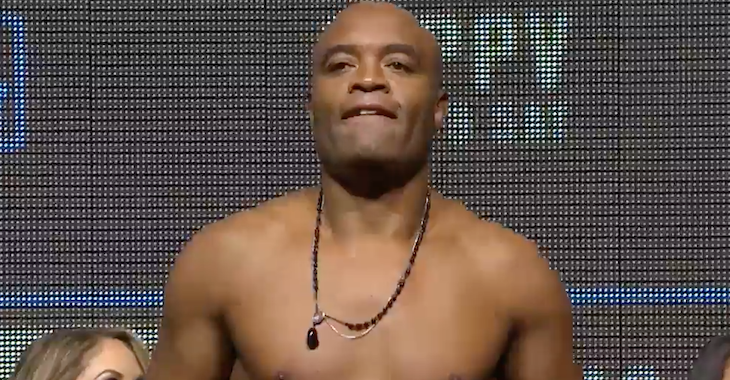 On February 11th at UFC 208, former UFC middleweight kingpin Anderson Silva will step into the Octagon for a highly anticipated showdown with middleweight prospect Derek Brunson.

For Anderson Silva, he will be looking to return to the win column and secure his first win since his 2012 win over Stephan Bonnar. While Silva defeated Nick Diaz in early 2015, he failed a drug test for PEDs, and the win was overturned to a no contest. As a result, Anderson Silva is currently on a 4-fight skid that is broken into a 2-fight skid by the no contest with Diaz. Following his no contest fight with Diaz, Silva dropped a controversial unanimous decision to Michael Bisping in London, before then stepping in on just 48 hours notice to fight Daniel Cormier at UFC 200 in July, where he dropped a unanimous decision. Brunson on the other hand will be looking to return to the win column after having his 5-fight win streak snapped by Robert Whittaker at the end of 2016.

Ahead of the scrap at UFC 208, Silva broke down the bout in an interview with Sportv:

“He’s very young and that helps a lot, but we don’t usually focus on an opponent’s strong suits, we look for their weak spots. We need to be very careful around him, because he’s so dynamic. He has very good wrestling, so we are training a lot of ground techniques and we are working on what I do best. Footwork, movement and using my experience.

“My patience and timing will help me focus on my specialty, which is my striking. It’ll be a very interesting fight to test everything we have been drilling and training over the years. He’s so dynamic and never stands still.”

Will Silva be able to snap his losing streak and return to the win column? Give us your predictions below PENN Nation!