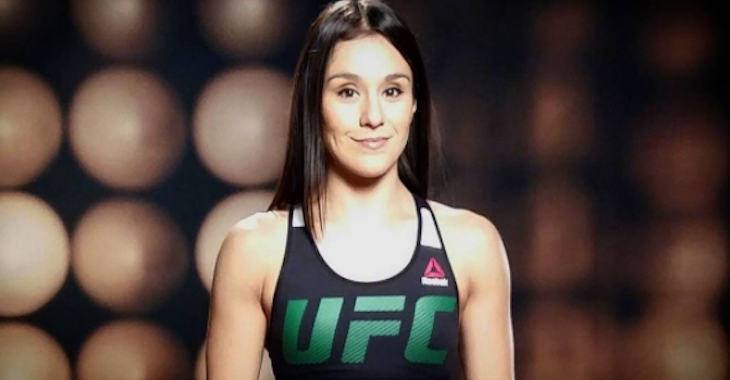 23-year-old Mexican talent Alexa Grasso entered the year 2017 with a reputation as one of the hottest prospects in the UFC strawweight division. In her first fight of the year, however, she experienced the first setback of her pro career, as she was out-hustled by the amply more experienced Felice Herrig, and ultimately lost a unanimous decision.

On August 5, when the UFC touches down in Mexico City with UFC Fight Night 114, Grasso will have the opportunity to bounce back from this first pro loss. Her opponent will be Canadian contender Randa Markos.

This fight was announced by the UFC on Wednesday.

Prior to her loss to Herrig, Grasso won 9 straight fights. She debuted in the UFC in November of 2016 with a decision defeat of the game Heather Jo Clark. Her pro career began with three straight knockout wins, all of which occurred in less than 40 seconds. Markos, meanwhile, recently picked up a career-best win, scoring a split decision over inaugural strawweight champion Carla Esparza in Halifax in February. She has alternated wins and losses over the course of her six fight UFC career, separating losses to Jessica Penne, Karolina Kowalkiewicz, and Courtney Casey with wins over Aisling Daly, Jocelyn Jones-Lybarger, and Esparza. The Canadian contender is 7-4 overall.

UFC Fight Night 114 will be headlined by a flyweight bout between Mexican prospect Brandon Moreno and long-time contender Sergio Pettis. It will also feature the second middleweight appearance of former UFC light heavyweight champion Rashad Evans, who will battle the ever-busy Sam Alvey.

Here’s the card’s lineup as it currently stands:

Do you think Alexa Grasso gets back on track at UFC Fight Night 114, or does the game Randa Markos take another big step toward the strawweight title?