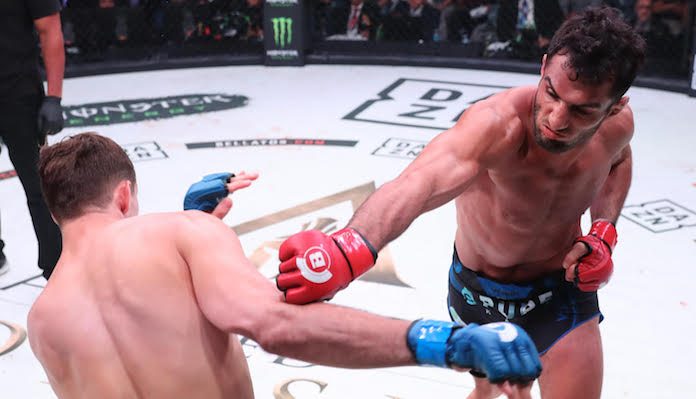 Last night, Bellator MMA promoted arguably its biggest card yet in Bellator 206. Given the scale of this card, Bellator MMA arranged to have the fights broadcast live on Channel 5 in the United Kingdom in the wee hours of them morning — rather than just airing it on tape delay long after it ended. And British fans were thrilled.

Unfortunately, UK MMA fans got a rather strange surprise as they geared up for the card’s massive Gegard Mousasi vs. Rory MacDonald main event. The fights suddenly disappeared, and were replaced by children’s television program.

You can imagine the horror of these fans, who had come for bloodshed, and instead got a talking pig.

I woke up to watch #Bellator206 and Peppa Pig is on Channel 5 instead of the main event.

At least it’s a good episode (the one where George and Peppa go the playground) pic.twitter.com/mPEHwH1xvC

Stay up all goddamn night for #Bellator206 and I’m watching Peppa Pig instead of the main event @channel5_tv pic.twitter.com/dvKYbnKFfB

Apparently, by the time the main event began, it was past 6:00 am in the UK. Per broadcasting regulations laid out by the government, nothing as violent as an MMA fight can air on television at that time, so the network abruptly gave fight fans the most logical consolation prize — Peppa Pig.

“It’s government regulation that at 6 a.m. that content was not suitable so they had to switch to children’s programming,” Schwartz explained (via MMA Fighting). “‘Peppa the pig’, yes.”

“I think that when I think about the replay [on television], I think that we can probably work it out,” Coker said, adding to Schwartz’s comments. “But it’s six in the morning on a Sunday there and we won’t be able to work this out until Sunday our time, Monday their time. But we are working on it.”

“Believe me, when it switched over there were a lot of texts going back and forth and they all were not friendly. We were trying to fix it, we thought it was a technical glitch. But it wasn’t, it was a governmental issue. I can promise you the next time it’s not going to happen. We’ll keep it down to five fights instead of six — like we normally do — and we tried to overdeliver for the fans and we just went over. It’s an unfortunate situation.”

If you were watching from the UK, what did you think of the Bellator 206’s Peppa Pig main event?