Tyson Fury appeared to be getting the better of Deontay Wilder throughout the opening eight rounds, using his speed and movement to outland the “Bronze Bomber“.

However, in round nine Wilder was able to turn the tide by dropping Fury with a punch.

Fury would rebound and came back strong in rounds ten and eleven. 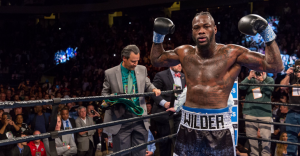 Then, in the final round of action, Deontay Wilder was once again able to floor Fury, this time with a combination that appeared to equal a sure finish.

Miraculously, and much to the shock of Deontay Wilder, Tyson Fury somehow managed to get back up to his feet and proceeded to throw punches until the final bell.

The controversial outcome caused a plethora of fighter reactions on social media, and once again brought up the question ‘are boxing fights being fixed?’.

Tyson Fury discussed last night’s controversial judges decision earlier today and insinuated that he may not have received a fair shake yesterday evening in Los Angeles.

“I’ve always found that all the way through, generations, history of boxing, all the massive fights have always been in the USA,” stated Tyson Fury. “So that’s what I did, I came over to crack the United States. And if everything would have been fair I would have been going home with the WBC belt. But no harm done, still the lineal champion, still unbeaten. We move on.”

Echoing Tyson Fury’s statements was his promoter Frank Warren, who issued the following comments on his fighters split-draw with Wilder.

“You travel if you think it’s going to be a level playing field,” said Fury’s promotor Frank Warren. “And when you get decisions and you get judges like you got last night, that’s when you think ‘Why don’t we stay at home?’ It should be fair. It’s terrible when you get a judge watching a fight that way. You wonder what sport you’re in. It’s wrong.”

Would you like to see an immediate rematch booked between Deontay Wilder and Tyson Fury? Sound off in the comments section PENN Nation!