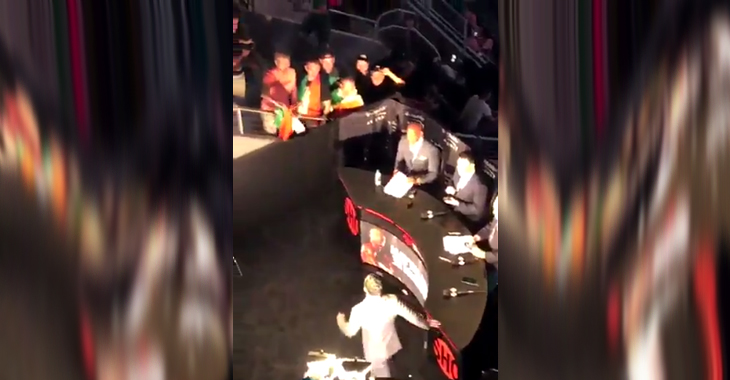 Today is the day. After Conor McGregor boxes Floyd Mayweather, we can put this all behind us. It’s been a wild and crazy ride, but it’s finally coming to an end. That is, unless your name is Paul Malignaggi. He’s trying to get a fight with McGregor by any means necessary. They’ve even almost exchanged blows outside of the gym, when they had an altercation at media day, caused by Malignaggi arguing with McGregor’s manager. That crazy thing is, he’s still working the event on air for Showtime. Even after saying he was a plant from Mayweather to spy on McGregor. What’s even crazier than that? He went after McGregor fans last night.

Hat tip to Eric Kowal of My MMA News for this gem. As you can see, some McGregor fans are cheering and were evidently mocking Paul Malignaggi. He got so mad that he jolted up out of his seat, nearly destroying a head set, to confront the Irish fans in attendance. How is he still working the event after all that has gone down between him and Conor McGregor? Either Showtime are in on the joke and are setting up something between the two, or they have just turned a blind eye to these shenanigans. Either way, Paul Malignaggi somehow keeps coming up with ways to make himself look worse and worse.