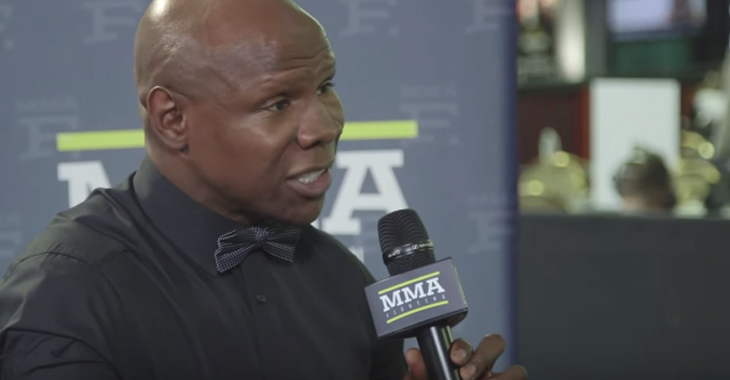 Do you remember those beer commercials of The Most Interesting Man in the World? Well, they are all wrong. The real most interesting man in the world is Chris Livingstone Eubank. If you’re not familiar with the gentleman, over a 13-year boxing career, Chris Eubank Sr. was undefeated for all but three of those years. He held the  WBO middleweight and super-middleweight titles, charming fans and opponents all along the way. If you’re interested in his impressive boxing career, anyone has Google, but we’re here for another reason: Poetry. Not only is every single thing that Eubank Sr. says poetry, but he actually recited poetry on the live episode of The MMA Hour this week.

VIDEO: British boxing great @chriseubank recited a poem while discussing #maymac yesterday. You have to experience it to believe it. pic.twitter.com/hUQyBAv8Pk

That beautiful man recited William Ernest Hemsley’s ‘Invictus’ by memory. People on Twitter watching were mesmerized by Chris Eubank Sr.’s words and poise, from the way he held the mic to how he captivated the room with his presence. He could read the phone book and it would be interesting. Can you even imagine how it would sound if Eubank Sr. ran some commentary for the UFC? It would truly be something different. That’s not the only words he had to say about Conor McGregor. He recited his own ‘warrior code’ which he felt McGregor embodied.

“The warrior is strong, yet his sleep is fragile. His wisdom, an amalgamation of precedent, yet his decisions cannot be based on the frailties of man. He is rather fueled by divine inspiration ascending from the heart. He knows not anger and only fears the unknown.

The warrior does not judge, for his true assignment is to deliver evidence of superior behavior to the creator of all men.

The warrior does not dream of frontiers. He only sees horizons.

The warrior is a creature of irony, for his genuine task is to ensure peace.

The true warrior knows, accepts, and embraces above all, integrity, which is his course of life; reason, and the application of reason, which is his only weapon; and forgiveness, the one true cleansing virtue.

And only when one can fully absorb these most divine of all virtues can one at last see how impossible and futile it is to make war.”