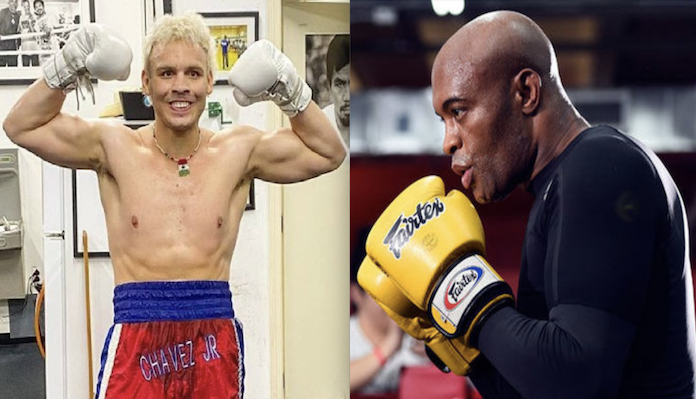 Julio Cesar Chavez Jr. is predicting a KO over Anderson Silva in the pair’s upcoming boxing match, saying that “I feel I can knock him out.”

Chavez Jr. takes on Silva in an eight-round boxing match on June 19 at Estadio Jalisco in Guadalajara, Jalisco, Mexico. For Silva, it’s his return to the boxing ring for the first time since 2005 after he was released from the UFC following a knockout loss to Uriah Hall last fall. The UFC legend struggled in the last few years of his career in the Octagon and UFC president Dana White decided to give the 45-year-old Silva his release from the promotion. However, he is still adamant that he can fight and has made the move to the boxing ring.

Speaking to MMAFighting.com ahead of the pair’s big matchup, Chavez Jr. offered his prediction for the fight, suggesting that he has the power to finish Silva with punches.

“I think the knockout is a great possibility in that fight. Because it’s (180lbs), the day of the fight, both will weigh 190 or 200, so it’s a heavyweight fight,” Chavez Jr. said. “I don’t know how he can take my punches. I feel I can knock him out. I’m not confident in only one punch but breaking him down, go to the body and head and I think I have a lot of possibilities to knockout him.”

It will be interesting to see how this fight plays out when it goes down in a few weeks from now. Chavez Jr. is far more experienced in boxing and has had a lot of success in the sport, but Silva is one of the best strikers we’ve ever seen in MMA and could have a few tricks up his sleeve for this fight. It should be an intriguing matchup regardless of what happens.

Do you think Julio Cesar Chavez Jr. can KO Anderson Silva in their boxing match?