Ruiz handed Joshua his first career loss by seventh round TKO to claim the IBF, WBO and WBA heavyweight titles.

Ruiz’s title win served as a massive upset and spoiled a potential super fight with the aforementioned Deontay Wilder.

One mans loss is another mans gain as they say, and ‘The Bronze Bomber’ suggests that Andy Ruiz Jr. enjoys the new perks that come with being champion.

“A huge congratulations to you Andy Ruiz Jr. for your upset win last night. You’ve been blessed to come out of the struggle and to become the 1st Mexican Heavyweight Champion Ever! Wow, that’s amazing and I’m wishing you many more blessings to come.”

P.S It’s all up to you in what you do with this huge opportunity. There’s many perks that comes behind it.
Blessings 🙏🏿✊🏿#BombZquad #SuperHappy4U #TilThisDay

“P.S It’s all up to you in what you do with this huge opportunity. There’s many perks that comes behind it. Blessings.”

While Deontay Wilder was all class in addressing Andy Ruiz Jr., the same could not be said for Anthony Joshua.

‘The Bronze Bomber’ had blasted Joshua hours after his shocking loss with the following statements on Twitter.

“He wasn’t a true champion. His whole career was consisted of lies, contradictions and gifts,” said Deontay Wilder of Anthony Joshua. “Facts and now we know who was running from who!!!!”

Deontay Wilder improved his record to 41-0-1 this past May, scoring a brutal first round knockout victory over Dominic Breazeale. 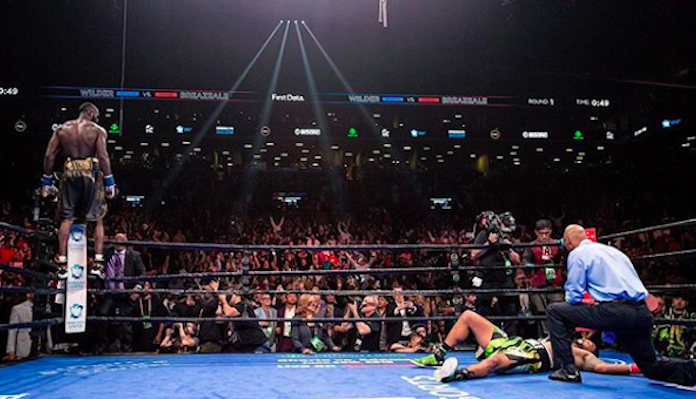 Wilder is in discussions for a rematch with Luiz Ortiz, with a future rematch against Tyson Fury looming on the horizon.

Would you like to see a future fight between heavyweight champions Deontay Wilder and Andy Ruiz Jr.? Sound off in the comments section Penn Nation!