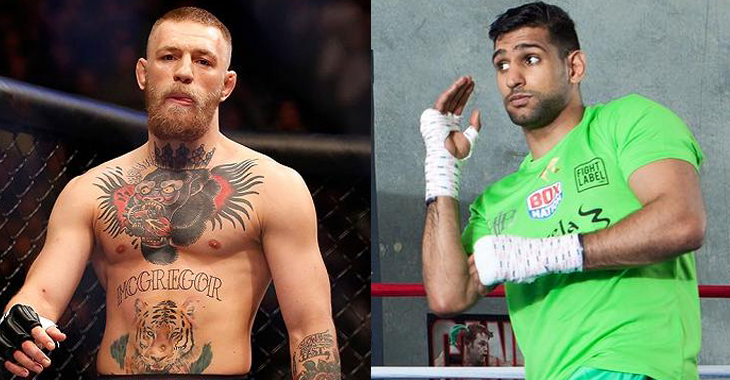 With a 31-4 professional boxing record that has seen him capture numerous world titles, one wouldn’t think that Amir Khan needs to prove that he is a man.

Despite that, the 29-year old British boxer is prepared to step into the Octagon with UFC featherweight champion Conor McGregor just to prove he’s a man!

After a photo surfaced of Khan holding a UFC championship belt, many began wondering if he would be making the transition to MMA. Khan followed up the picture by doing an interview, in which he expressed his desire to make the jump to MMA.

Now, in a new interview with Jefferson Lake, Khan explained why he is ready to prove his manhood by fighting McGregor:

I’ll go and fight [McGregor] just to prove I’m a real man. I’m not one to back away, I’ve never backed away from any fight and I never will.

Conor seems to have the same kind of attitude as well, so maybe that’s something that in the future that can happen. I say why not? I would definitely step into the Octagon with him. Conor, you’re a big name and let’s make this fight happen. I’d love to take him on. If Conor wants it, let’s have it.