A heavyweight clash between Shamil Abdurakhimov (20-5 MMA, 5-3 UFC) and Chris Daukaus (11-3 MMA, 3-0 UFC) is slated for later this summer, on July 24, sources with knowledge of the situation told BJPENN.com.

The sources asked for anonymity since the news hasn’t been officially announced yet. Las Vegas, Nevada has been targeted as a possible location, but it’s not official at the minute.

The 39-year-old Russian fighter has been away from the scenes for almost two years, since his last fight against 265-pound contender Curtis Blaydes. During that occasion, Shamil Abdurakhimov was stopped in the second round by the Illinois native. After that night, “Abrek” has been set to return multiple times, twice against the surging Frenchman Ciryl Gane, and once opposite to Brazil’s own Augusto Sakai. All of those fights have been eventually scrapped due to various reasons, and Russia’s own athlete has been forced to the sideline until now. 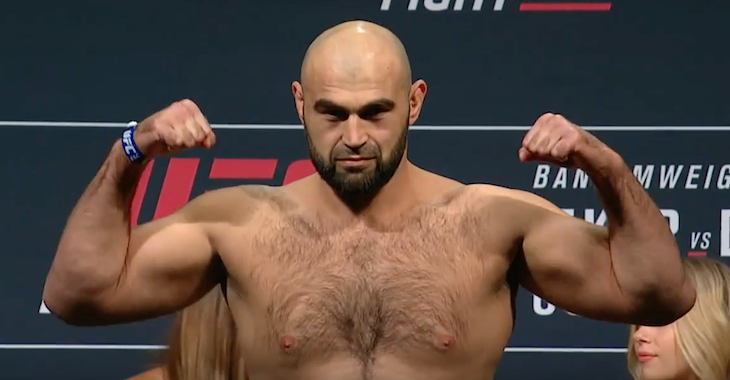 On the other hand, Chris Daukaus made his promotional debut just nine months ago, in August 2020, and he’s currently sporting a three-fight winning streak having triumphed on Parker Porter, Rodrigo Nascimento, and lastly on another Russian fighter, Aleksei Oleinik. Prior to his UFC first fight, the Philadelphia-native behemoth cut his teeth in the US regional scenes, having competed in promotion in the likes of CES MMA, King of the Cage, and Cage Fury Fighting Championships.

During his last interview with BJPENN’s reporter Cole Shelton, Daukaus said that he was expecting to gain the 10th spot in the UFC heavyweight ranking, with a win over the submission specialist, Aleksei Oleinik.

He took that spot, indeed. And now he’ll try to climb the 205-pound ladder once again, facing the 7-ranked athlete, Shamil Abdurakhimov.

The two heavyweight fighters will clash on July 24. The event is going to be headlined by a possible title-eliminator between Cory Sandhagen and the former bantamweight belt-holder T.J. Dillashaw.