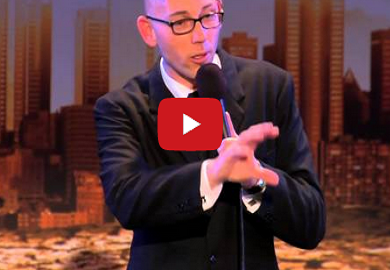 Ian Harris, trainer of fighters such as Mac Danzig and Dan Hardy has been trying his hand at comedy, and just so happens to be great at it! The success has led him to getting his very own comedy album on iTunes and InDemand which will release on August 12th.

To get you ready for the album we have brought you not only the official announcement from Ian, but also a sample of his comedy as well.

The “hilarious and irreverent” comedy of Ian Harris comes to Video on Demand and iTunes August 12, 2014!

Born and raised in the California Bay Area, Ian toured nationally as a top headliner, as well as being a staple on the L.A. alternative comedy scene for years. Winner of many major comedy competitions, he has been seen on Jimmy Kimmel Live, Comedy Central and was ranked #25 on Entertainment Journal’s Top 100 Comedians list.
If you are a fan of clever comedy with an edge, don’t miss your chance to see the comedian who has been dubbed,”the punk-rock, wordsmith of comedy”.

Ian Harris: Critical & Thinking will premiere on August 12, 2014 on iTunes and InDemand. Check your cable or satellite provider for times and channels

You can pre-porder the album here on iTunes.